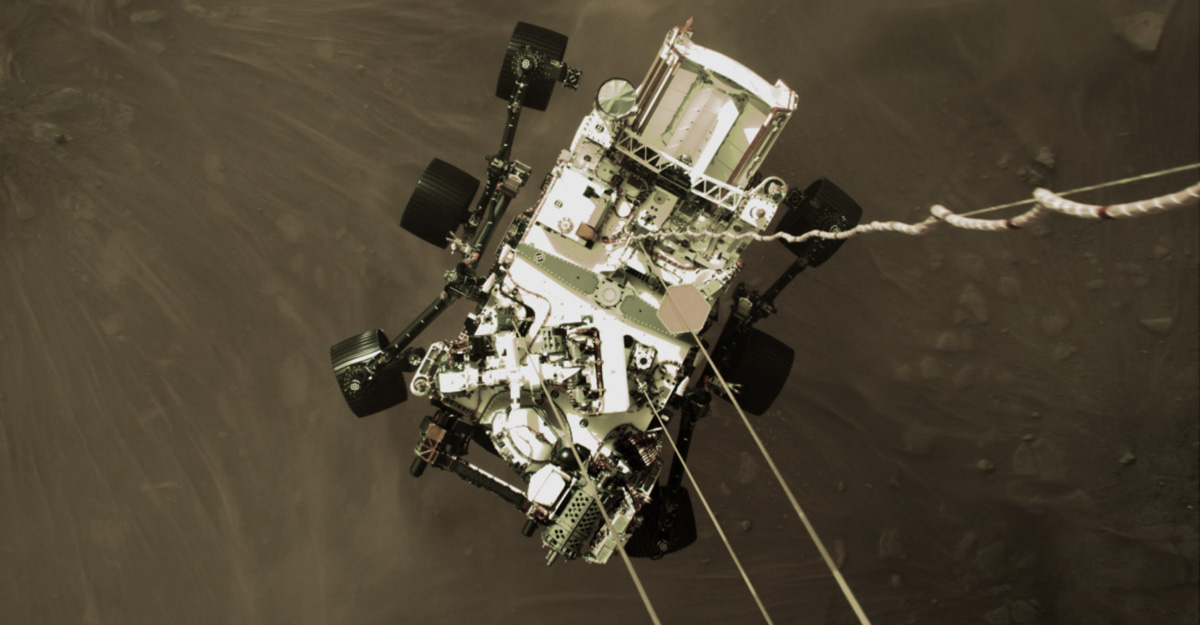 Posted at 10:15h in Uncategorized by Vaneshree Maharaj

NASA, the US-based space agency successfully landed the Perseverance Rover on 18 February 2021 as part of the Mars 2020 mission. This is NASA’s fourth rover mission to the red planet and it is the first to host a tiny helicopter, with plans to collect Mars samples that will be returned to earth in a future mission.

A view from the descent stage (sky crane) as NASA’s Perseverance rover prepares to land on Mars on 18 February 2021. IMAGE: NASA.

“This mission will be flying a helicopter, and it will be the very first time that a heavier-than-air machine has attempted to fly on another planet,” says SANSA Chief Scientist, Dr. Michael Kosch, who is keeping a close eye on the mission.

Read also: SANSA partners with NASA to develop a new deep space ground station which will support missions to the Moon and Mars

The onboard helicopter, dubbed Ingenuity, will be NASA’s technology demonstrator for powered flight on Mars, and Kosch is looking forward to seeing how the device handles Mars’ thin atmosphere and other harsh conditions.

The Perseverance Rover has pioneered a few important milestones, such as the second attempt at the skycrane maneuver for gently landing the rover, a myriad of new cameras to see Mars in a new light, and equipment for drilling on the surface to obtain samples to be returned to earth with a future mission.

“That we can go to another planet and bring samples back is something that has never been done before,” says Kosch. “It is much easier to do the chemical analysis when you have the stuff here on Earth. We know that’s possible because the Japanese have managed to bring back samples from asteroids. The Americans have brought back samples from the moon.”

Having samples brought back to earth will allow scientists all over the world to determine if there are any signs that life ever existed on Mars and give researchers more clues regarding the history of our neighbouring planet, and if the earth might encounter the same fate of losing most of our water and atmosphere.

Mars 2020 is just one of many missions to the red planet currently underway from large economies such as China, to emerging countries with blossoming space agencies like the United Arab Emirates (UAE). The UAE’s Hope Mars Mission successfully sent back images of the red planet after it arrived at Mars orbit just days before Perseverance, and China’s Tianwen-1 mission is in Mars orbit with plans to land in April or May 2020.

“Just knowing that something is possible inspires other countries, including South Africa, to do this development,” Kosch says.

What’s Trending at SANSA?
Dr Steward Bernard anchors himself to bright future at SANSA
Groundbreaking ceremony for Space Weather Centre
NEOFrontiers is the new frontier for local earth observation
Here’s to the next decade of reaching for the moon!