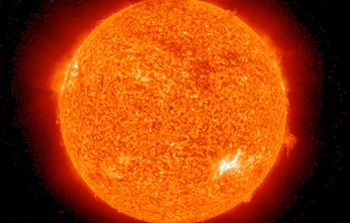 Posted at 15:02h in News, Space Science by Daleen Fouche

New research [1] predicts that the new solar cycle (SC25) is going to be stronger than initially expected. It is now believed solar cycle (SC25) will be at similar intensity as SC23 which brought us the famous Halloween Storm of October 2003 which caused widespread blackouts in Sweden [2] and significant damage to transformers in the local power grid and other middle latitude regions [3].

This new forecast is somewhat controversial as it deviates significantly from the forecast of the Solar Cycle 25 Prediction Panel (SC25PP) that SC25 will be mild (akin to SC24) [4].

McIntosh, Chapman and others (2020) [1] published a paper and explained how the duration and timing of the transition between the old and new solar cycle — the “terminator” — could be used to predict the amplitude of the new solar cycle.

This relationship was established by analysing 270 years of solar cycle data, mostly contained in sunspot number observations.  By using fairly standard signal processing techniques — Hilbert transforms —  they found that there is a linear relationship between the duration between terminator events and the intensity of the solar activity cycle.

The magnetic structures that define the helio-magnetic field differ slightly for every cycle and a certain amount of locally imbalanced magnetic field at any one time is needed to form an active area. In other words, the structures in the solar magnetic field react with each other and, McIntosh, et al. postulates, that longer overlap periods between structures mean they more effectively cancel each other resulting in a weaker cycle. The opposite also holds: shorter termination periods result in a more intense cycle.

A recent re-analysis of their work (see [5] and tweets by the author [6]), utilising this method and recent sunspot observations of transition between SC24 and 25, predicts that the peak of SC25 will have sunspot number (SSN) of about 230. This is significantly higher than the 130 SSN predicted by SC25PP.

The difference is significant — we are now looking at a strong cycle, compared to the very moderate predictions.  We can see this in action in the graph below that shows the comparison between the old and new predictions. The Macintosh, et al. model is in agreement with current sunspot numbers, while the milder prediction underestimates the current levels.

The take-home message for SANSA is three-fold:

Figure 1: Previous and future solar cycles quantified by sunspot number. We can see that the new prediction of an intense SC25 (red) seems to be better aligned with recent observations than the SC25PP prediction (blue). Figure URL: https://spaceweather.com/images2022/26feb22/newprediction.jpg

SANSA: Ten years of Excellence in HF Communications
The Carrington Event – the most intense Solar storm in recorded history!
A Glancing Blow May Make the Night-Sky Glow!
International Space Weather Camp 2023
Looking beyond our skies for space weather