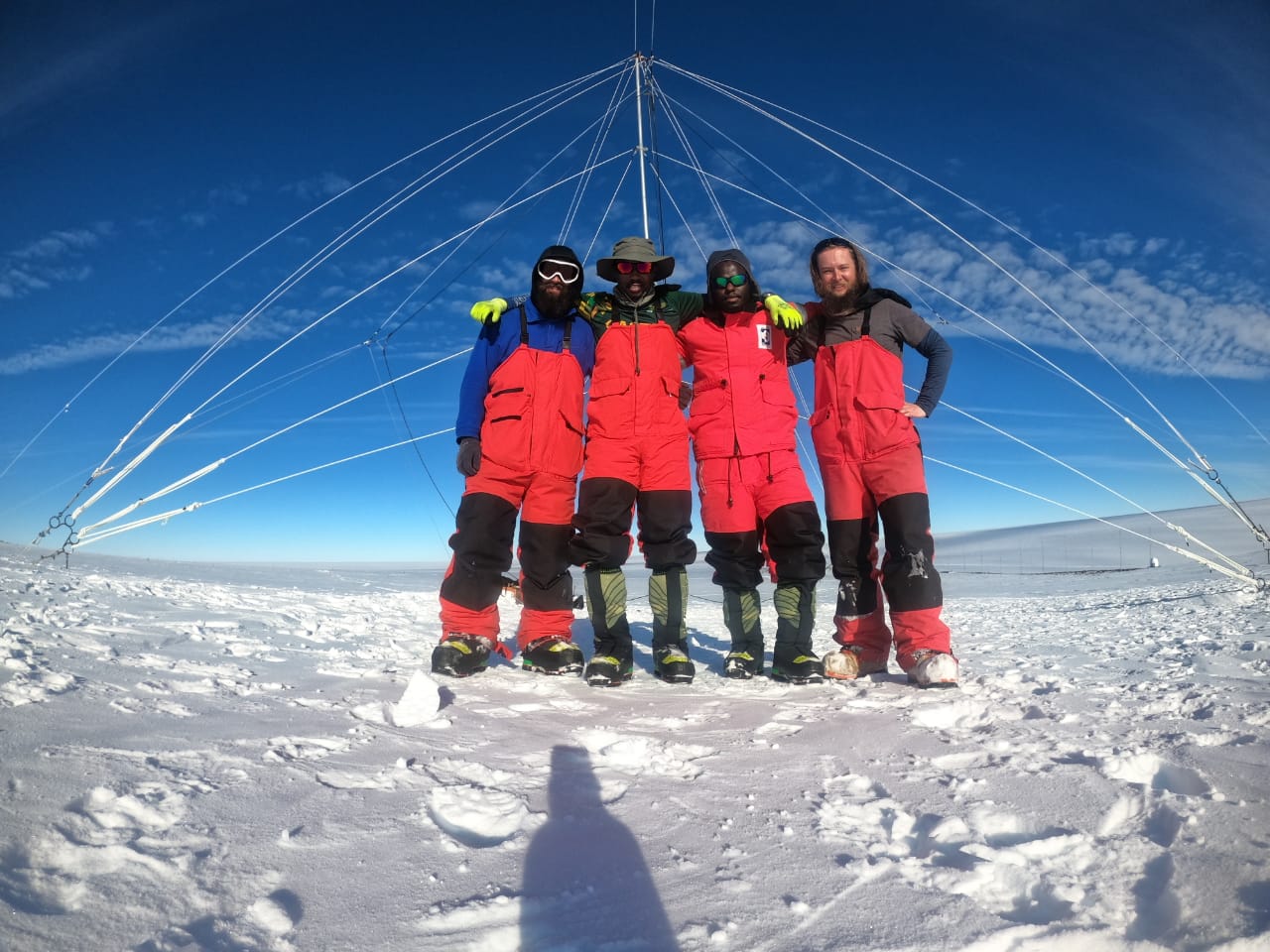 Posted at 11:56h in News, Newsletters by Jacques Kichenbrand 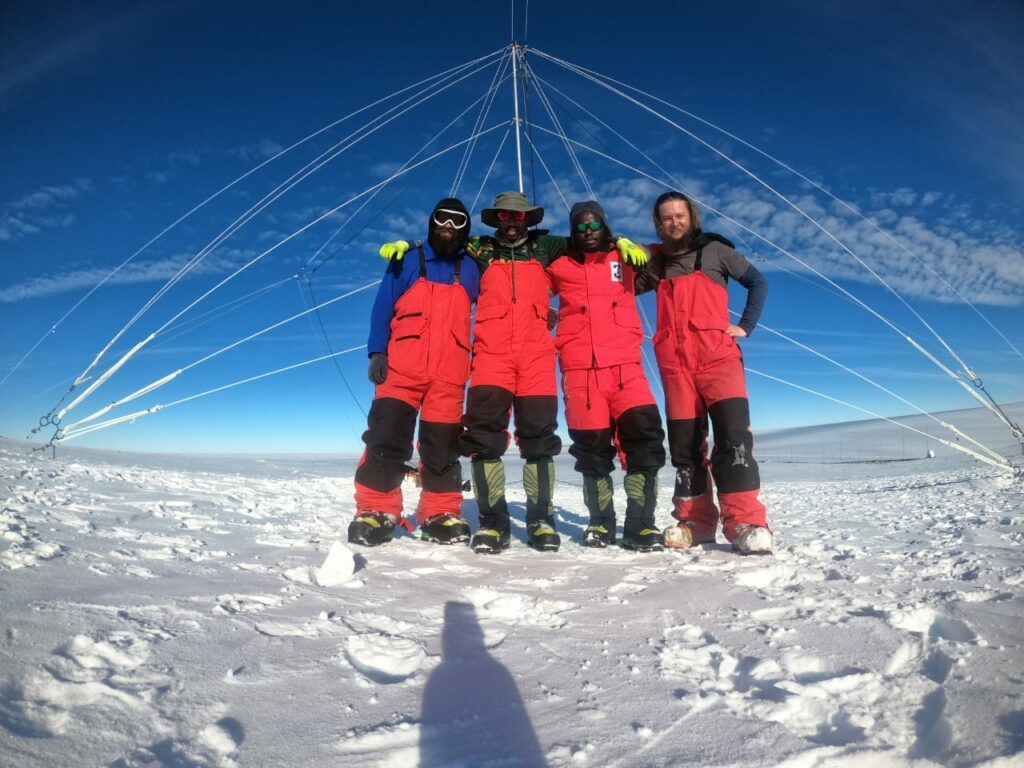 In the photo are the returning SANSA Engineers and the replacement team.

Every year, a multi-disciplinary team is deployed to the Antarctic base – SANAE IV. This team is known as the “Year Team” as the deployment lasts 14 months before the team is replaced with a new one. The team consists of a doctor, a communication engineer, a mechanical engineer, an electrical engineer, two diesel mechanics, a meteorologist and two SANSA electronic engineers (VLF and Radar).

How the shift-change works

The annual shift-change, or “Takeover”, is the period during which the new team is taken to the Antarctic to relieve the previous team. During this time there are many operations and parties involved:

The S. A. Agulhas II takes about two weeks to get to the Ice Shelf (where the ice meets the ocean in a high cliff). It might take longer to get to the Ice Shelf depending, on how much ice there is floating on the ocean (referred to as sea ice). This is highly dependent on the time of year. The S. A. Agulhas II can only get there during the summer months.

The S. A. Agulhas II uses its crane to unload cargo and fuel onto the ice shelf, from where it is transported via CAT trains to the base, which is about 180km inland. This journey can take anything from 14 to 40 hours. A CAT train usually consists of 3 CAT Challengers, each pulling two or three sleds loaded with cargo containers or fuel tanks. Base personnel are usually flown to the base by helicopter (a 40-minute journey). During the takeover, the SANSA engineers have a lot of annual maintenance to do on the instruments. The current engineers train the new engineers on some specific things they haven’t been trained on back in Hermanus.

One of the biggest projects based in Antarctica is the SuperDARN Radar. It consists of 16 masts, each with an antenna, that need to be climbed to perform corrective maintenance. Each antenna is driven by a complicated high-power transceiver – each of which needs to be serviced during the takeover period. GNSS scintillation, magnetometer, riometer, ozone radiometer and VLF experiments also need to be done.

The SANSA engineers also have to help with other base operations such as cleaning, sorting waste, unloading food and other items from the containers into the base and driving cargo to and from the Ice Shelf.

When it’s time to leave, the outgoing team as well as all takeover personnel get flown back to the S.A. Agulhas II and leave the new year team behind to look after things for the year.

There is a runway at the base, so it is possible for people to be flown in or out – but only during the summer months since the weather is too bad in the winter. Usually, the takeover is from the beginning of December to the end February of each year.

“I really enjoyed being part of the Year Team”, said Christopher Gray, one of the SANSA engineers who has just returned home. “I found the work extremely interesting, challenging and rewarding. Time is very strange on the base, there are no proper day-night cycles and nothing ever really changes. The landscape stays the same, you see the same people all the time, the interior of the base stays the same. It doesn’t really matter when you wake up or go to bed, as long as you get your work done and the instruments are running correctly. The best part of the experience was the incredible aurora we saw. The worst part, for me, was when we had to go and shovel snow into the snow smelter in deep winter. There was one month where we couldn’t go outside for a few weeks due to weather and then we finally had a break when the wind dropped to 20 knots.”

Christopher and his fellow SANSA team member, Matthew Spoor, were responsible for the operations and maintenance of all scientific instruments at the base. They had to make sure that data was constantly being recorded and stored so that the scientists could access the data at all times. After each storm, the two engineers had to go outside to check each instrument to make sure nothing was broken or in need of repair. They were also responsible for taking care of the North West University’s Neutron Monitors.

Watch this video to see how SANSA Antarctic Engineers live and work at the South African Antarctic Research Base SANAE IV.

SuperDARN (Super Dual Auroral Radar Network) is an international High Frequency (HF) Radar network for studying the Earth’s upper atmosphere, ionosphere and connection into space. The network currently consists of 37 radars that look into the Earth’s upper atmosphere beginning at locations in the mid-latitudes and then extending into the Northern and Southern Polar regions. The network has been operating as an international co-operative organisation for about 30 years and has proved to be one of the most successful tools for studying space weather.

The radars operate continuously and observe the motion of charged particles (plasma) in the ionosphere and other effects that provide scientists with information on Earth’s space environment. The knowledge gained from this work provides insight into space weather hazards including radiation exposure for high-altitude travellers and disruptions to communication networks, navigation systems (GNSS), and electrical power grids.