Posted at 11:15h in News, Space Science by Daleen Fouche

It takes a year for the Earth to go around the Sun, and it takes a month for the Moon to go around the Earth.  These two orbits sometimes line up perfectly to have the Moon directly between the Sun and the Earth.  When this happens, the shadow of the Moon moves across the Earth and creates a Solar Eclipse.  Along this path, the day suddenly becomes night for a few minutes.  Parts of the Earth close to the direct path will still see a bit of the Moon’s shadow.  On 4 December 2021, the Sun, Moon, and Earth lined up and the Moon’s shadow fell on Antarctica.  Figure 1 shows a picture of the Earth taken from a spacecraft far out in space along the Sun-Earth line.  The black splotch in the photo is the eclipse.

Only the edge of the shadow touched South Africa this time, but the eclipse was seen clearly from the  South African National Antarctic Expedition (SANAE) station which makes measurements of the magnetic field at the surface of the Earth and the ionosphere (50-1000 km altitude).  The path of the full eclipse passed close to SANAE as shown in Figure 2. Figure 3 shows a series of photos taken at various stages of the eclipse from SANAE. The ionosphere is a layer of the atmosphere that is ionized by ultraviolet light from the Sun.  High energy photons knock electrons off the atoms and molecules.  Normally, these ions slowly recombine when the Sun sets every day.  When an eclipse happens, the atmosphere in the Moon’s shadow is instantaneously thrust into darkness and the ions start to recombine.  The movement of these charged particles not only change the dynamics of the ionosphere but also induces a local fluctuation in the magnetic field.

The images in Figure 3 show the progression of the Moon across the Sun as a function of time.  The eclipse as seen from SANAE was not total.  The Moon passed along the top of the Sun in the images, so the illuminated “smile” changes direction throughout the eclipse.

In addition to solar eclipses being exciting to see, scientists gain valuable information about sudden changes in the upper atmosphere of the Earth.  When the light from the bright Sun is blocked, we can also see the dim structures extending out from the Sun into interplanetary space:  the corona. 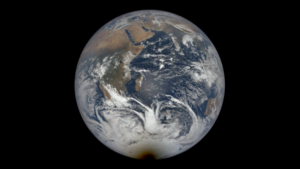 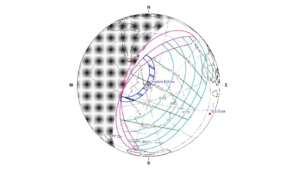 Figure 2: Path of the Moon’s shadow over Antarctica. Regions within the blue line experienced a partial eclipse. The subsolar point marked with a red star was not far from the SANAE-IV base.