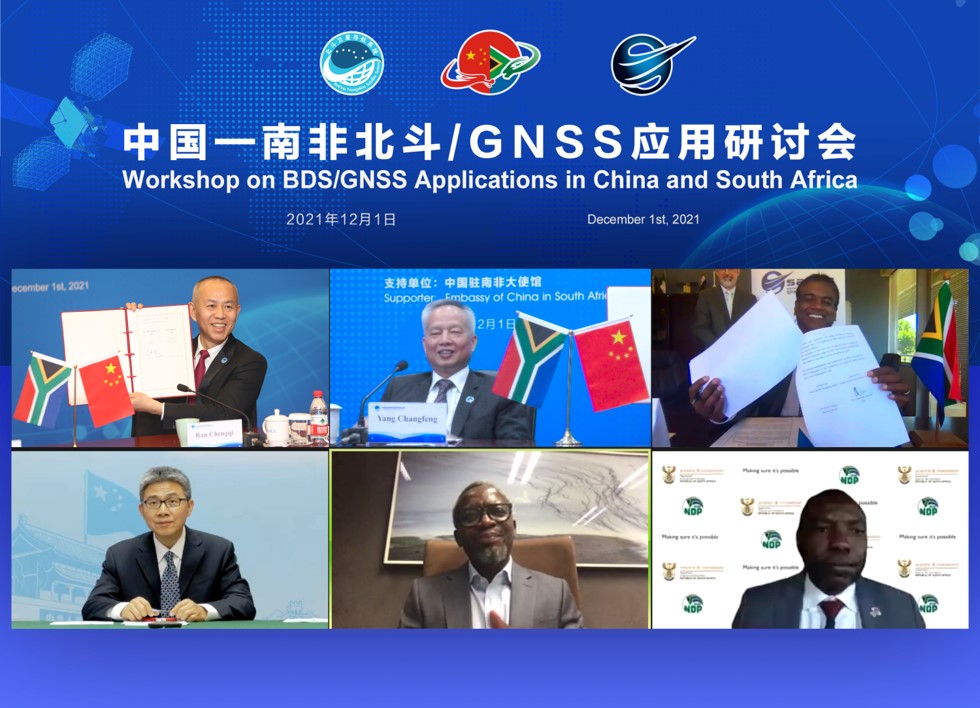 Posted at 11:49h in News, Press Release by Vaneshree Maharaj

The aim of the MOU serves to encourage cooperation between the Parties in the field of the Global Navigation Satellite Systems (GNSS) in a framework of equality, cooperation, common benefit and reciprocity in accordance with the laws and regulations prevailing in each country.

The MoU signed on 1 December 2021, includes intention for collaboration within the field of satellite navigation, strengthening exchanges and cooperation in the domains of satellite navigation technologies, talents cultivation, applications and industrialization as well as Research and Applications of BeiDou Navigation Satellite System (BDS) /GNSS in geophysics, space science, geodetic survey and other sectors based on GNSS data amongst other interest areas.

This MoU is supported by bilateral cooperation between South Africa and China and facilitated through the Department of Science and Innovation. “This is an exciting endeavor for the country as greater investment and support to the space engineering industry will mean growth in scarce engineering skills, strengthening of the knowledge economy and support to Government’s goal of addressing poverty through unemployment.” said Mr Mmbonene Moefe, DDG at the Department of Science and Innovation

Minister LI Zhigang, Chinese Embassy in South Africa, stated in his opening speech, “ Signing this MOU will further strengthen both countries’ research in the field of satellite navigation testing and evaluation, accelerate the application of Beidou satellite navigation system in transportation, logistics, precision agriculture, public safety among others, and provide more impetus for both China and South Africa to catch up with the 4th industrial revolution and realise the sustained development goals of our two countries.”

“SANSA is on a growth trajectory and global partnerships are necessary for sustainability and success of a national space programme that benefits not only South Africans, but the continent. We are eager to establish such partnerships and afford the local industry the opportunity to contribute and benefit in this exciting area of space technology.” said Dr Val Munsami, SANSA CEO.

Mr. RAN Chengqi, Director General of China Satellite Navigation Office expressed that “China and South Africa, together with other African countries enjoy huge potentials on satellite navigation cooperation, according to the Vision for Promoting China-Africa Cooperation on BDS released in this November on the First China-Africa BDS Cooperation Forum. CSNO is eager to collaborate with SANSA under the framework of this MoU, to jointly make BDS and navigation satellite systems better serve Africa and the world and benefiting all mankind.”