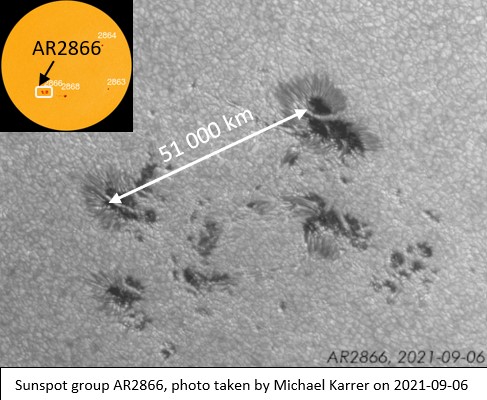 14 Sep Space Weather News: From minuscule to Mammoth in 24 hours

Posted at 11:14h in Space Science, Uncategorized by Robert Daniels 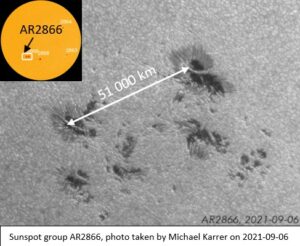 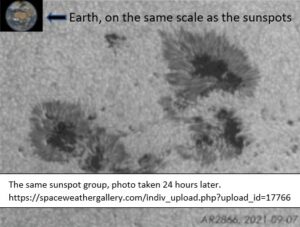 Sunspot group AR2866 is currently in a geo-effective location on the solar disk and has doubled in size in 24 hours from 6 to 7 September.

When it came into view on the limb of the Sun on 5 September, it was one of six sunspot groups on the visible side of the Sun, but it was then minuscule. On 7 September it had grown to a mammoth-sized sunspot group, with the largest spot in the group being twice the size of the Earth. On 8 September this sunspot group had grown to be the largest group on the Sun and produced several C-class flares, including a C8-class flare at 17:36 UT. The explosion caused a brief shortwave blackout over the Americas. This group has the potential for more flaring in the next few days, which may give rise to an Earth-directed coronal mass ejection (CME), if not during the current solar rotation, then maybe when it re-appears in a geo-effective position in 27 days when the Sun has made one solar rotation.

The sunspot number had grown from 68 on 5 September to 87 on 9 September. A large part of this number occurs in the sunspot group AR2866.

“Counting sunspots is not as straightforward as it sounds. There are two official sunspot numbers in common use. The first, the daily “Boulder Sunspot Number,” is computed by the NOAA Space Environment Center using a formula devised by Rudolph Wolf in 1848:R=k (10g+s), where R is the sunspot number; g is the number of sunspot groups on the solar disk; s is the total number of individual spots in all the groups; and k is a variable scaling factor (usually <1) that accounts for observing conditions and the type of telescope (binoculars, space telescopes, etc.). Scientists combine data from lots of observatories — each with its own k factor — to arrive at a daily sunspot value. The Boulder number is usually about 25% higher than the second official index, the “International Sunspot Number,” published daily by the Solar Influences Data Center in Belgium. Both the Boulder and the International numbers are calculated from the same basic formula, but they incorporate data from different observatories. As a rule of thumb, if you divide either of the official sunspot numbers by 15, you’ll get the approximate number of individual sunspots visible on the solar disk” [1]

Sunspot numbers increase and decrease through an average cycle of 11 years. Dating back to 1749, we have experienced 24 full solar cycles where the number of sunspots has gone from a minimum, to a maximum and back to the next minimum, through approximate 11-year cycles. We are now well into the 25th solar cycle.

Read more about Sunspot numbers at