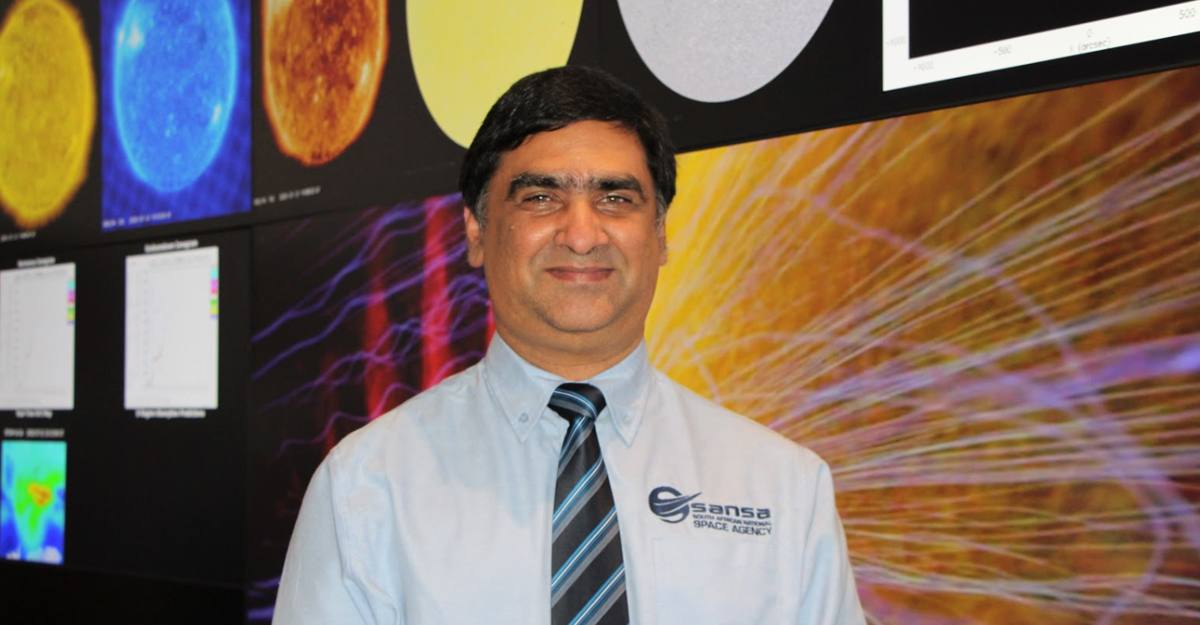 When the position of Space Weather Project Lead opened up at SANSA, Keenan Janneker jumped at the opportunity of working with a space agency, something he’d been fascinated about for a long time.

Keenan Janneker is excited to be leading the space weather centre project and realising a 24/7 operational facility. IMAGE: SANSA

“Never in my wildest dreams did I think I would join a science or space agency. I had watched so many space programmes, documentaries and TV series, and I never thought I would work in that environment,” he says.

One of the recent “science” programmes he has enjoyed, which also  inspired him to apply for this role, was the TV comedy series  “The Big Bang Theory”. In addition to his good fortune, the new job would be a stone’s throw away from his house in Hermanus.

As Project Lead, Janneker is responsible for realising the design, constructing, and commissioning of a new 24/7 Space Weather Regional Warning Centre and three auxiliary buildings as well as assuring ISO 9001 certification at SANSA’s facilities in Hermanus. This certification is required by the International Civil Aviation Organization (ICAO) to ensure aviation providers and users become familiar with the impacts of space weather on the sector by including space weather information in all flight plans by 2022.

Janneker, a long-time veteran in operations and quality management, brings with him vast experience of getting things done. He has a passion for looking at operations from an end-to-end perspective, starting with an idea from conceptualisation, going through the development (prototype) process, series production, and finally making sure that the end-product is as close to the client or customer’s requirements as possible.

He gained this skill starting from his education as an industrial engineering student at the University of Johannesburg’s Doornfontein Campus.

“I spent most of my working life in the motor industry, starting at Mercedes Benz in East London as an industrial engineer and Continuous Improvement Specialist,” Janneker says. “I was then head-hunted by South African Breweries (SAB) in 2009 and worked for them as a Manufacturing Development Consultant and Specialist after being with Mercedes Benz for almost 10 years.”

In his three months at the helm so far, Janneker says he is extremely excited to see the designs of the new 24/7 Space Weather Centre facility finally concluded, and approved internally, and one step closer to breaking ground. Even more exciting for him is the transformation of the Space Weather Centre into becoming a more operations and customer orientated facility, while balancing and maintaining “blue-sky” research as well.

Janneker says working for SANSA feels like finally coming home, both in the sense that he gets to be around his family in Hermanus, and also a job that he feels like he has been preparing for since his career began. “SANSA feels like home because it is where I can apply all the knowledge and skills I have gained in a new exciting environment of space science, research, engineering, and space weather.”

The impacts of space weather on aviation

Space weather events are capable of seriously disrupting modern technologies such as satellites, GPS, power grids, and navigation and communication systems. High-frequency radio communication infrastructure, as well as ground and air-based navigation systems, can be disabled or knocked out entirely by solar storms, while radiation exposure poses a hazard for airline crew and passengers, especially during long-haul flights.