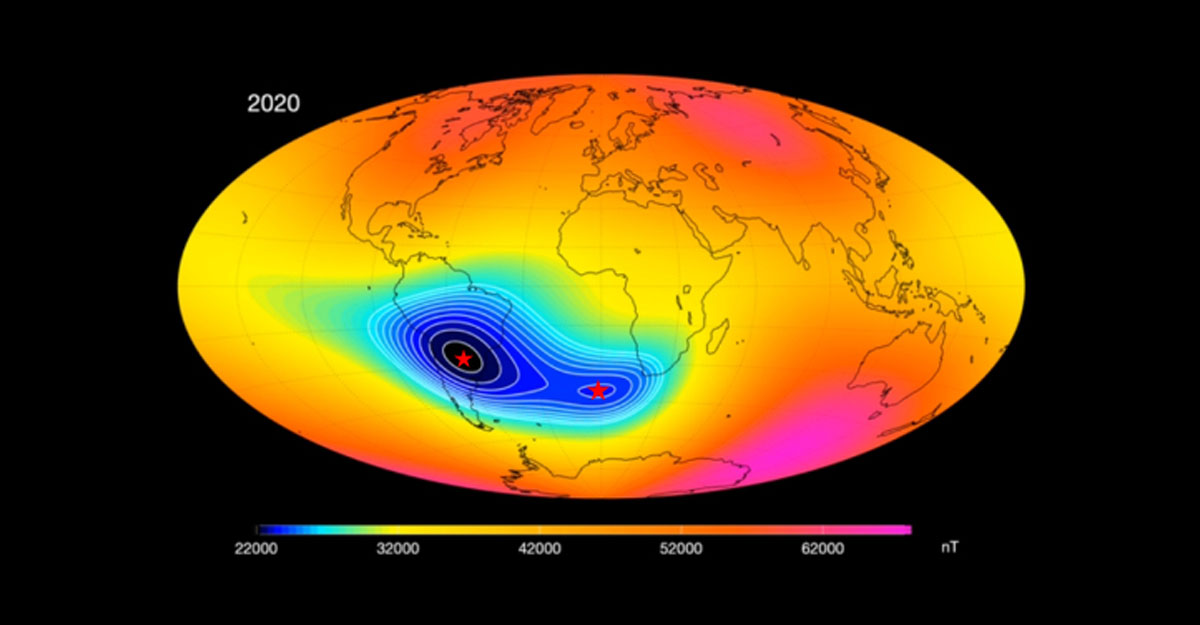 Posted at 14:56h in Uncategorized by Vaneshree Maharaj

SANSA’s data on the South Atlantic Anomaly is in demand as the phenomenon’s area of influence rapidly expands, potentially threatening satellite communications and navigation in southern Africa.

The South Atlantic Anomaly is an area where our protective shield against dangerous radiation from the sun is weak. This animation shows the magnetic field strength at Earth’s surface from 2014 to 2020, based on data collected by the Swarm satellite constellation. Source: Division of Geomagnetism, DTU Space.

This is according to Dr Pieter Kotze, a researcher at SANSA’s Science Research and Applications unit. Kotze says the South Atlantic Anomaly is a feature of the earth’s magnetic field that has been known about for over 400 years.

“The South Atlantic Anomaly is a region in the earth’s magnetic field in the South Atlantic region where the earth’s magnetic field is approximately 30% weaker than as would be expected at similar latitudes and altitudes around the globe,” says Kotze. “This region has been studied for the past 400 years with some information from the British sailors in the era of exploration.”

This ‘hole’ in the earth’s protective magnetic field is a region where space weather radiation can penetrate into the earth’s atmosphere, and has the potential to create damage to low-earth orbit satellites flying through that region. Satellite operators design their satellites to take certain protective measures when traversing this region – the Hubble Space Telescope for instance turns off its sensors.

Southern Africa is relatively close to the anomaly, leading to a relatively weak magnetic field over the region.

“At Hermanus, which started doing magnetic field measurements in 1941, we detected a drop in the earth’s magnetic field of close to 20%, which is extremely fast in comparison to other parts of the world, which can normally expect a 10% decrease over a period of say 100 years.”

The South Atlantic Anomaly has been observed to split in two with part of it getting closer to southern Africa. The anomaly is also moving westward at a rate of 20km per year, which increases the anomaly’s area of influence demonstrated by an observed weakened magnetic field over southern Africa. Kotze says it is unknown where the turning point of this migration is, but he suspects that it might culminate in a polar reversal, most probably in the next millennium, where the north and south poles switch places.

“This probably will not happen in our lifetimes,” he says. “If we did have to live through a polar reversal, it would be an extremely interesting phenomenon to observe because you’d be able to see more than one north and south pole appear moving towards the equator.”

The growth and movement of the anomaly means that satellite operators need to be aware of the increased danger to important satellites that fly through the region. “Unfortunately, you cannot run away from a solar storm, you have to ride the storm, and minimise the effect as far as possible so as not to have a long term devastating effect on society. ”

“Satellite operators are fully aware of the dangers of the South Atlantic Anomaly, and when they launch new satellites they make sure that they use electronic components of extremely high quality, and incorporate more shielding for the instrumentation when they fly through that particular area.”

As services such as satellite and magnetic navigation are affected, SANSA continues to provide services such as space weather warnings and up-to-date magnetic information to the global community. “Our data is sought after, especially now that the magnetic field is changing at such a rapid rate.”