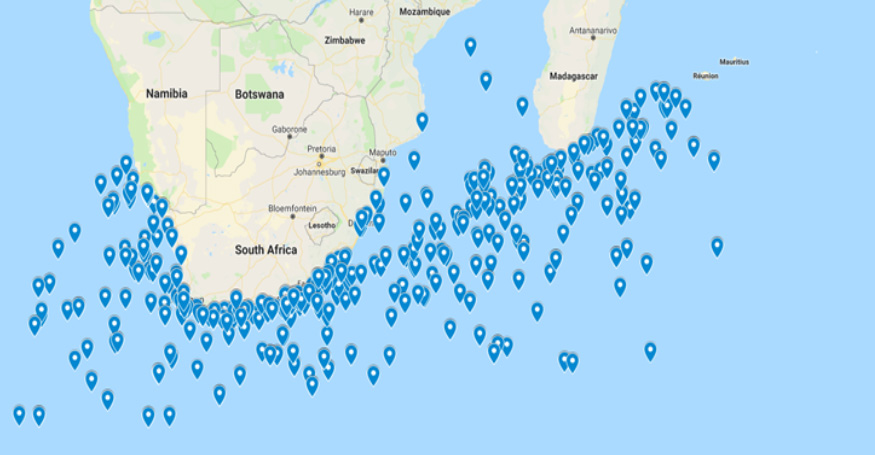 Posted at 12:10h in Uncategorized by Vaneshree Maharaj

South Africa launched the ZACube-2 satellite in December 2018. Its mission: to show that South Africans can successfully build a spacecraft to track ships at sea and detect fires.

Data showing all vessels found in and around South Arican waters, captured by ZACube-2’s predecessor.

The Cape Peninsula University of Technology developed the satellite with funding from the Department of Science and Technology. Its launch marks an incredible milestone and the stakes are high, because this mission could determine the future of space technology in South Africa.

This is according to the Executive Director of the Space Programme at SANSA, Mr Amal Khatri. He leads a team at SANSA responsible for implementing South Africa’s national space programme, which involves earth observation, space operations, and satellite development.

“We don’t just want to build satellites because they are cool, but because the country really needs them,” he says.

One such need is protection against threats to our marine environment. “Looking at the vast oceans that surround our country,” says Khatri, “we find a lot of ships entering and leaving our waters; some of which we can’t identify and some of which could be involved in illegal activities like overfishing or smuggling.”

A key technology on board the satellite is able to track ships at sea through radio communication and visual confirmation. “The satellite makes an electronic handshake with a vessel’s transponder to confirm it is legally there,” explains Khatri. If anything untoward is detected, authorities are notified to investigate.

Large fires are another big threat to South Africa. Khatri explains that satellites are essentially our eye in the sky that lets us see things like ships and fires from space.

He says ZACube-2 is thus an important ‘technology demonstrator’ – a proof of concept that  South Africa can successfully design and build satellites to fulfill these tasks. Such a technological leap could help make South Africa less dependent on other countries for space services, which in turn creates local jobs for engineers, technicians and scientists.

Khatri says this mission is creating an environment at SANSA where highly skilled workers can thrive, especially those fresh out of university.

In fact, universities contributed some of the most important technologies for this mission, alongside private companies: satellite development is one way that SANSA supports the burgeoning South African space technology industry. For instance, researchers from Stellenbosch university created ZACube-2’s attitude control system to help the satellite orient itself in space.

Khatri is currently plotting SANSA’s ten-year technology development trajectory, and he says ZACube-2 is the first stop on the way to many more space missions and satellites that support South Africa’s specific needs.

He says the next stop could be a constellation of satellites designed to survey our ocean resources.