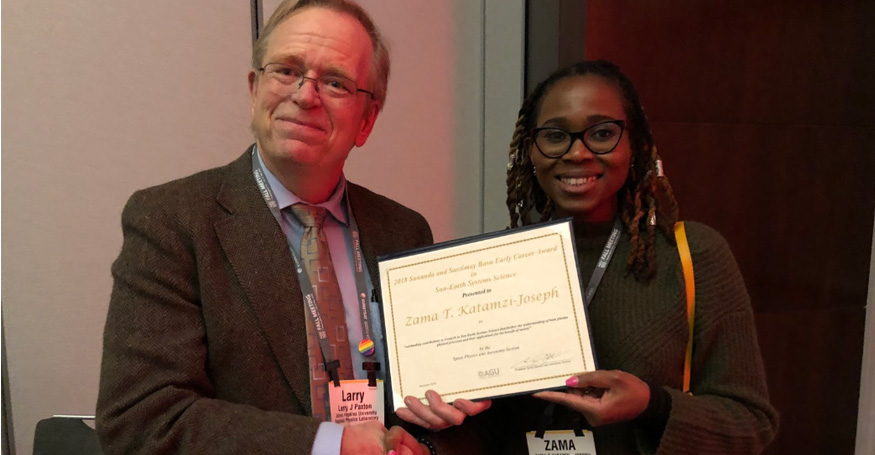 Posted at 11:58h in Uncategorized by Vaneshree Maharaj

Dr Zama Katamzi-Joseph has been selected to participate in the prestigious Fulbright Visiting Research Scholar Programme – an opportunity to conduct research at a U.S. institution for a few months.

Dr Zama Katamzi-Joseph is presented with the Early Career Award in Sun–Earth Systems Science from the American Geophysical Union (AGU). Presenting the award is Dr Larry Paxton, head of the Space Physics and Aeronomy section of the AGU.

Since joining SANSA as a researcher, Katamzi-Joseph has mainly been looking at winds in the thermosphere.

“The winds in the thermosphere are important because they may drive the behaviour of the ions in the ionosphere,” she explains. The ionosphere is another atmospheric layer that is crucial for communication on earth and in space.

With funding from the Royal Society’s Newton Advanced Fellowship, Katamzi-Joseph leads a team of researchers using thermospheric winds to study gravity waves in the thermosphere.

“I want to know what the characteristics of a gravity wave are, so that we can predict where it is going, and what changes it will make in that part of the thermosphere and ionosphere,” she says.

“It is quite the mouthful,” she jokes, “but I am very pleased to receive such a prestigious award.”

“The individuals representing the 2018 section awardees and named lecturers are among the best and brightest in their scientific fields,” said Eric Davidson, AGU President. “To be named and recognized from among their scientific peer groups is a testament to their innovative research, leadership, and accomplishments.”

These awards are but the most recent in a string that began from the moment she enrolled for her BSc Physics degree at the University of Cape Town. Her lecturers were so impressed that she earned a spot on the Dean’s Merit List in 2002.

Early in her career, she was accepted into the National Astrophysics and Space Science Programme (NASSP) honours programme, after graduating from her BSc in 2004. “I joined a few years after the NASSP programme started, with an intention to do astrophysics,” she recalls. But after being exposed to space science, she enjoyed it so much that she made the switch and never looked back.

She went on to graduate MSc with distinction at Rhodes University, and set off to the University of Bath in the United Kingdom to start her PhD. “While doing my Master’s I met a group of researchers at the University who had developed software useful to my work. I asked for an opportunity to do my PhD with them,” she says.

Upon completing her PhD in 2011, she returned to South Africa to begin a post-doctoral study with the Space Science Programme at SANSA, where she’s been a bright young star ever since.