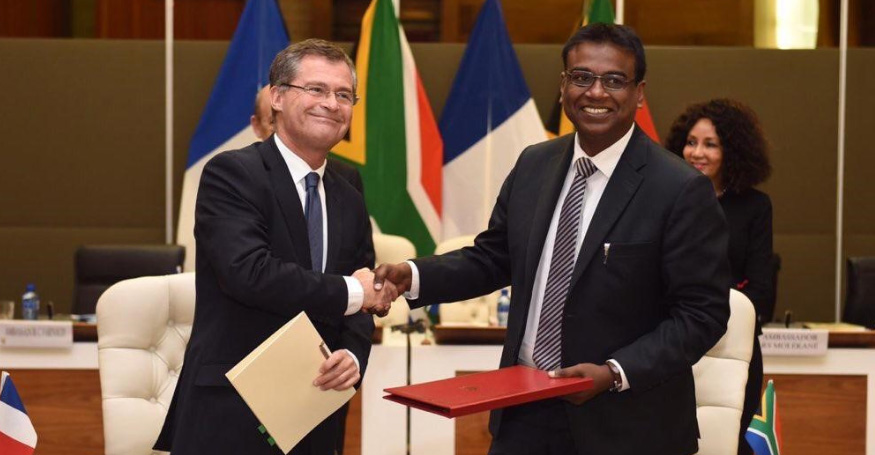 Posted at 12:39h in Uncategorized by Vaneshree Maharaj

France and South Africa have shaken hands on a new blueprint for space cooperation. The two countries already have a longstanding commercial relationship through the French ground station based at SANSA Space Operations in Hartebeesthoek.

The MoU outlines how the two agencies will work together to train engineers, and how the Space Climate Observatory (SCO) and the International Charter on Space and Major Disasters fits in.

CNES was represented by Jean-Pascal Le Franc, and SANSA by CEO Valanathan Munsami.

“CNES is proud and honoured that SANSA is partnering with it in this wide-ranging cooperation,” said Le Franc.

He said SANSA plays a vital role in the development of space activities, in South Africa and across the African continent.

“Pursuing its policy of active cooperation with the new space powers, CNES is delighted to consolidate its presence in Africa – a region of the world where the priorities of French space policy, especially tackling climate change, take on an extra dimension.”

Munsami expressed SANSA’s optimism in response: “We have enjoyed a fruitful relationship for almost 40 years, and this MoU cements that partnership with the intent of making greater strides in space investment both locally and abroad.”

The fruits of this relationship helped to feed South Africa’s space sector, which has grown to the point of launching its very own fleet of micro- and nanosatellites.

This includes the recent launch of the pioneering ZACube-2, made possible in part through the French South African Institute of Technology (F’SATI) programme.

The programme enabled training for postgraduate students who studied at French institutions and at the Cape Peninsula University of Technology (CPUT), which developed the ZACube-2.