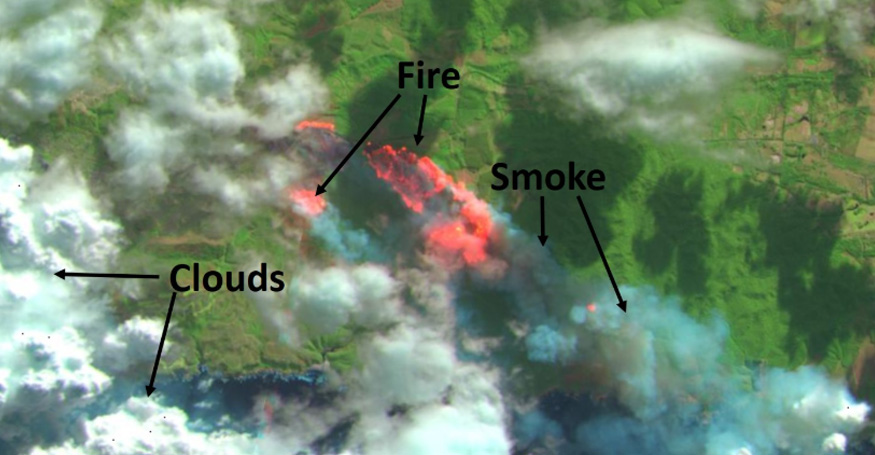 Posted at 12:08h in Uncategorized by Vaneshree Maharaj

An image captured by the Sentinel-2 satellite shows smoke and fire from the devastating Knysna fires of 2017. SANSA researchers used this and other satellite data to measure the impact of the fires.

When forest fires devastated Knysna in 2017, masses of smoke and aerosols billowed into the sky. How much pollution did the fires cause, and how did it spread? Researchers at SANSA have only just uncovered the extent of the damage.

Their study, recently published in the International Journal of Remote Sensing, found that the Knysna fires of June 2017 scarred the landscape and produced large amounts of pollution that created unusual weather in its wake, and likely has had a long-term impact on weather patterns.

Perhaps as important, the study itself shows how much more scientists can figure out when they pool resources from different disciplines. Dr Lerato Shikwambana, a space science researcher at SANSA, led the part of the study looking at the aerosol constituents and spread of the Knysna fires. He quickly realised he would need more expertise and resources than he had access to, so he reached out to his colleagues from different disciplines.

One of the scientists he wanted on his team was Dr Oupa Malahlela, who works on Earth observation at SANSA.

Together, the team shifted the priority of the study towards proving that multiple sensors and models could be used to characterise wildfires, using the Knysna fires as a case study. “While other probes were looking into how the fires started, we were interested in finding out what constituted the pollution that went into the atmosphere,” says Shikwambana.

Due to overcast conditions on the day of the fire, the smoke had mixed with clouds. The optical instruments in space used by the Earth observation research team cannot distinguish between aerosols and clouds, which is why Shikwambana’s team used data collected by a special satellite called CALIPSO, or the Cloud-Aerosol Lidar and Infrared Pathfinder Satellite Observation, instead.

Malahlela and colleagues also measured how much vegetation the Knysna fires destroyed.

“I used a satellite called Sentinel-2, an optical instrument with a ground sampling distance of  10 meters,” says Malahlela. This means that each pixel on the image represents 10m² on the ground.

He found that the fires had burned through more than 20% of the area’s forest cover.

“Collaboration on the Knysna fires study shows how space science and Earth observation research can be complementary.”

They found, for instance, that the aerosols did not go inland but rather were carried by a south-easterly wind towards the Indian Ocean.

From the CALIPSO data, Shikwambana also showed that the smoke and heat from the fires created pyrocumulus clouds, a rare type of cloud caused by wildfires and volcanic eruptions that can turn into thunderclouds and storms.

Shikwambana and Malahlela say that future research may look at the effect this unusual weather had on the fires themselves, and on the Knysna area. They also hope to continue this interdisciplinary collaboration to drive future research projects.