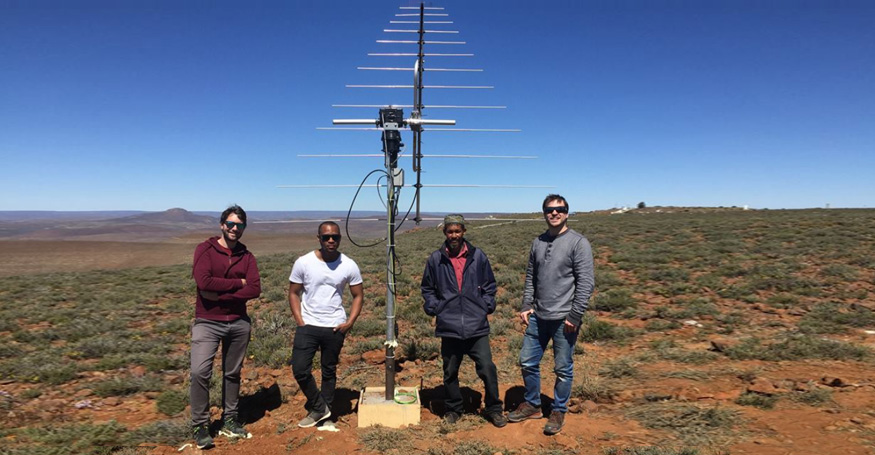 Posted at 13:29h in News, Newsletters by Vaneshree Maharaj

The South African National Space Agency (SANSA) has joined an international network of instruments observing the Sun with the recent installation of a CALLISTO radio spectrometer. Developed in part by highly skilled SANSA engineers, the new instrument will expand the capacity of SANSA’s Space Weather Station in Sutherland.

CALLISTO radio spectrometers have been placed all over the globe to form the e-CALLISTO network which monitors the Sun 24 hours a day. The instruments continuously record the Sun’s radio spectrum and the data is sent to a central database which is accessible through a public website interface.

The network will be a valuable new tool for South Africa and the rest of the world to monitor the solar radio spectrum.

The Sun is observed every day using satellites, space probes and ground-based equipment to measure solar particles, X-rays, and extreme UV light, but still little is understood about the dynamics of the solar corona (the superheated plasma around the Sun). Activity on the outer surface of the Sun can release coronal mass ejections (CMEs), massive bursts of radio waves and solar particles which can threaten satellites and other communication equipment on Earth.

CMEs are just one of the phenomena that Mpho Tshisaphungo looks out for at the sentinel Space Weather Centre in Hermanus. Before e-CALLISTO, the SANSA Space Weather Centre was not able to observe CMEs locally in near-real time and over a long period; most of the data came from NASA satellites. “We will no longer be fully reliant on data from external sources,” she says.

While the project started in June 2014 at SANSA, the South African node of the e-CALLISTO network was finally installed in Sutherland  and switched on in September 2018 after a lengthy process of design, implementation and site selection, which involved moving it from Hermanus due to high radio frequency interference (RFI). SANSA engineers developed the Sun-tracking antenna system, low noise amplifier, radio receiver and PC logger for the instrument.

The e-CALLISTO PI Institution donated the radio receiver and software for integration with the SANSA-designed hardware to ensure compatibility with the global e-Callisto network. In addition to Tshisaphungo who will be working closely with the data from the instrument, the project was led by SANSA Engineering and Data Acquisition Manager, Jonathan Ward.  The project involved several other SANSA team members and in-service trainees, as well as students from the University of Cape Town (UCT), Stellenbosch University (SU), and the Cape Peninsula University of Technology (CPUT).

SANSA used the e-Callisto project to develop skills in the areas of microwave systems, antenna systems, RFI and computing. The data will be channeled to and used at the Space Weather Centre, in near-real time, to detect and classify solar flares as well as for space science and space physics research.

With very few of these instruments located in Africa (only two others: in Kenya and in Egypt), SANSA plans to install a second instrument on a farm in the Free State in collaboration with North West University. This will be an important step in putting South Africa and the rest of the continent on the global stage, helping to unravel the mysteries of the Sun by keeping a close eye on our temperamental host star.

“This gives us the chance to participate in a global community network of solar radio spectrometers,” Tshisaphungo says “It’s a big step for us.”