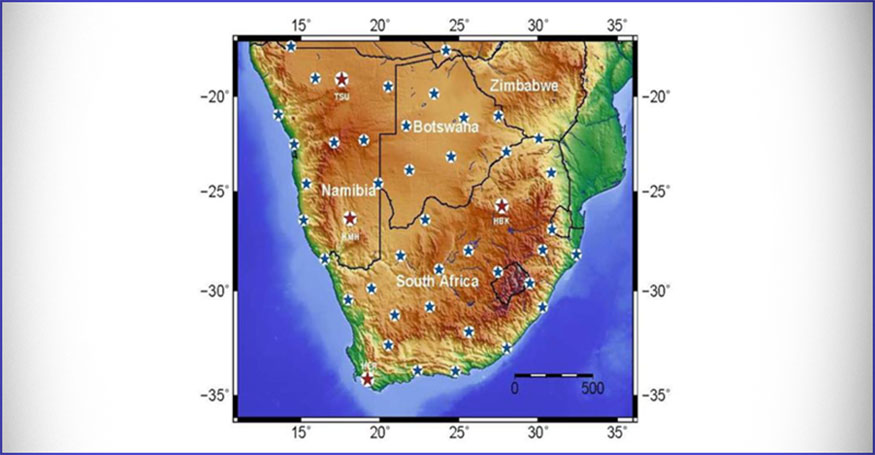 Posted at 13:27h in News, Newsletters by Vaneshree Maharaj

An invisible force protects life on Earth from dangerous space weather, allowed humans to navigate to new lands in the past, and helps you find the nearest pizza place in the present. SANSA’s geomagnetic surveys and magnetically clean environment help monitor this force so we can continue to enjoy luxuries like pizza on demand.

The earth is continuously battered by charged particles from the sun and other sources in outer space, but the earth’s magnetic field protects us from the majority of these. More accurately known as the geomagnetic field, it is a dynamic phenomenon that is constantly changing and shifting.

The South African National Space Agency is the current torchbearer for a long line of researchers that monitored the ever-changing geomagnetic field; at the centre of South Africa’s contribution is the Hermanus Magnetic Observatory (HER).

SANSA Researcher, Dr Pieter Kotzé, recently penned an article on the history of geomagnetism in South Africa centered around the Hermanus Magnetic Observatory. In the article, also published in the History of Geo- and Space Sciences journal in August 2018, Kotzé relays the important historical role that SANSA’s geomagnetic capacity played and still plays in South Africa and the rest of the world.

He explains how HER participates in international projects involving satellite missions, and how it forms part of a network of geomagnetic survey stations spread across southern Africa. “These stations help us study patterns of magnetic variation over southern Africa and the influence of the South Atlantic Magnetic Anomaly.”

The South Atlantic Anomaly is a region where the Earth’s magnetic field is 25% weaker when compared to other regions of similar latitude around the globe, which effectively creates a hole in the Earth’s shield against space weather. “This can result in radiation damage to sensitive electronics on board low-Earth orbit satellites,” says Kotzé.

Thomas Chauque, instrumentation technician who visits these stations to take measurements for annual geomagnetic surveys, says “We aim to map out changes in the earth’s magnetic field across the whole of South Africa.”

“The disturbance in the earth’s magnetic field has effects on human life by disrupting the power grid, communications, and navigation systems.” He visits the 40 repeat stations regularly to take measurements.

The Hermanus site was chosen after the original site in Cape Town was inundated with development, including electrified railways which cause interference to sensitive magnetic instruments. Hermanus today is still remote and situated away from such interference, so much so that the small town possesses a train station that has never seen a train. It is for this reason that the the Observatory needs to continue being protected, by law, from any development that might interfere with observations.

The Observatory at SANSA’s Hermanus facility has a magnetically clean environment which makes it one of the only sites in Africa to take baseline measurements for geomagnetic surveys and calibrate magnetic equipment for aircraft and navy vessels – a valued service to our defence force and private aviation companies.

Due to the permanent and induced magnetic properties of aircraft, all aircraft compasses have to be “swung” (calibrated) to cancel the magnetic effects of the aircraft itself, and this important procedure can only be done at the magnetically clean environment at Hermanus. All military aircraft of the South African Air Force (SAAF) are required by law to have a magnetic compass as an important back-up to the integrated navigation system.

A magnetically clean area also has important uses in the maritime sector, space weather applications, space industry applications, and in predicting environmental hazards. Currently, SANSA remains the only facility in Africa that calibrates magnetic sensors for dynamic platforms such as unmanned aerial vehicles and satellites.

The magnetically clean environment in Hermanus remains important to many industries in South Africa and beyond, and not just making sure you get hot pizza when you want it. South African law can be used to ensure that the area remains protected – one way to do this could be to expand the Astronomy Geographic Advantage Act (Act 21/2007) to include the Hermanus area.