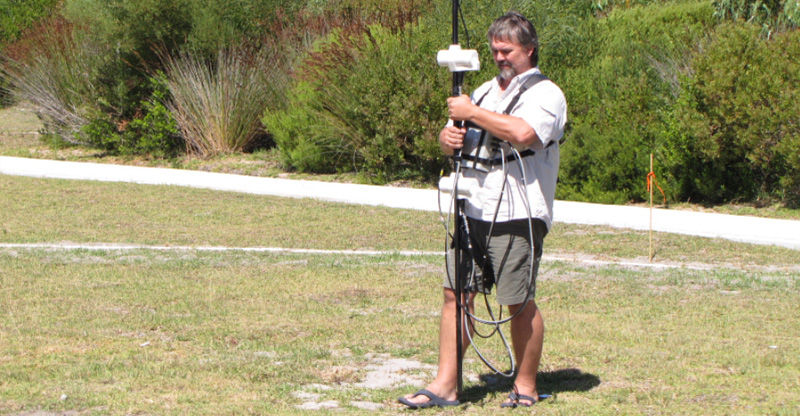 Finding a needle in a haystack is exactly the unique expertise of SANSA’s Applied Science and Technology Unit in the Western Cape, whether they’re searching for illegal arms caches in the sand dunes of Sandbaai, or the signs of the first human settlements on Robben Island. 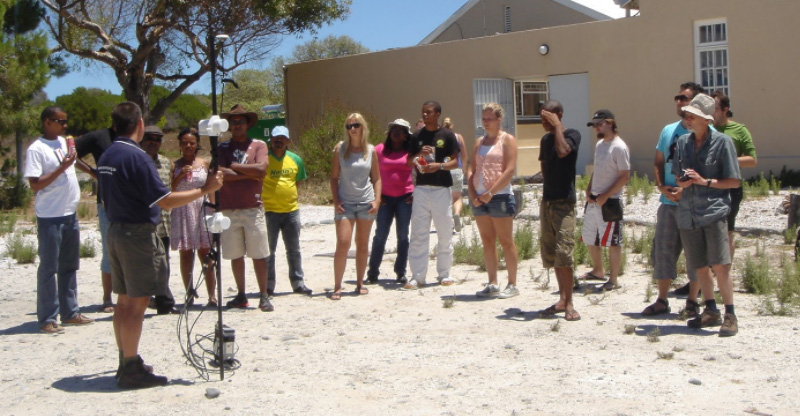 Gouws explaining the use of a magnetic gradiometer to a group of Dutch and SA Marine Archeology students on Robben Island.

The Hermanus police called, and the Applied Science and Technology (AST) Unit answered their plea for some neighbourly assistance in finding a firearm believed to have been stashed in nearby sand dunes. Equally, they jumped at the opportunity to assist Iziko Museums in the search for the first settlements on Robben Island, as well as for the remains of a slave ship that disappeared close to the southernmost tip of Africa in 1766.

It’s all in a day’s work for this multi-talented group of specialists who, from their base in Hermanus, have spent the past two decades helping the South African Air Force to keep their fleet safe, as well as supplying support with accurate magnetic navigation.

Now, says AST Manager Danie Gouws, they have their sights set on doing the same for the South African Police Services’ (SAPS) Air Wing, which has its own fleet of helicopters and fixed-wing aircraft.

Their work for the country’s armed forces involves maintaining and calibrating mechanical compasses used on board every aircraft, as required by international flight safety laws. In addition, they offer a training facility to qualify more aviation and marine compass adjusters in southern Africa.

Gouws says they are currently awaiting the outcome of a proposal to provide a similar service to SAPS’ Air Wing. 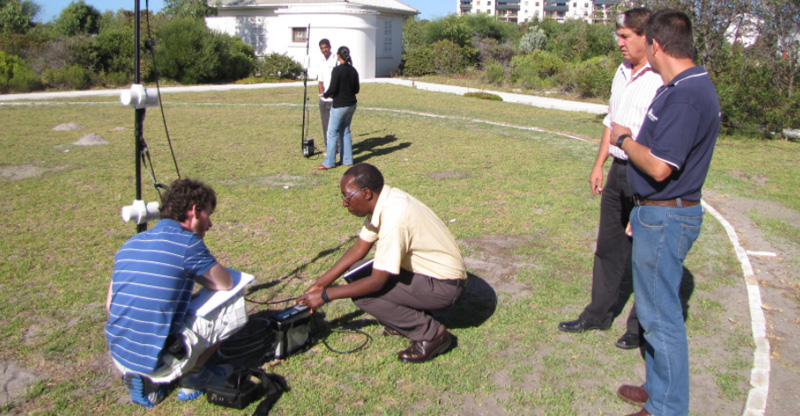 Joint training workshop between staff members from SANSA and Iziko Museums to improve their technical capabilities in the use of magnetic gradiometers.

His unit got some hands-on experience in police work recently, when their neighbours in Hermanus asked whether they could assist the police to find a firearm reported to have been buried in the nearby dunes.

The specialists grabbed the opportunity to test the accuracy of their proton-precession gradiometer, an instrument that measures the vertical gradient of the Earth’s magnetic field at a specific position, indicating the presence of magnetic items underground.

Gouws explains that the instrument, and the technique, are vital when seeking magnetic objects such as iron, cobalt and nickel. When searching for ammunition, which is made mostly from copper and lead, which are non-magnetic metals, ordinary metal detectors could also be used to assist.

In the Sandbaai incident, earlier in 2018, they might not have found the firearm, but Gouws says their instruments, both of which comprise very accurate magnetic sensors and search coil induction sensors, recorded hits or possible underground anomalies at three different locations.

After searching in these locations, they turned up a rusty knife and two smaller pieces of metal.

“We didn’t find what we were looking for, but we did confirm the accuracy and reliability of our instruments, which was very positive,” he says.

The gradiometer, put simply, comprises two magnetic sensors mounted vertically, one about 600mm above the other. These two spaced sensors, Gouws said, provided far more information than just looking at the magnetic measurement or signature of the underground anomaly.

Jaco Boshoff of Iziko Museums “walking a grid”: taking magnetic measurements using the two-sensor gradiometer. The electronic unit strapped to his chest provides a readout of the magnetic field as well as the gradient of the field – these values are also stored for future data analysis.

“What we observe is the difference between the two magnetic sensor measurements, and in those three hits we saw the gradient go up to very high levels. That is how we marked those points.”

The unit had assisted in previous searches for buried arms caches, and conducted similar work with Iziko Museums archaeologists searching for signs of the first settlements on Robben Island.

In a separate mission for the national museum authority, they also assisted in a search between the high and low water line near Struisbaai for remnants of the wreck of the slave ship Meermin. The ship left Madagascar in 1766 with 140 slaves aboard, but they revolted and took over a few days later. The Meermin is believed to have run aground near Struisbaai in the ensuing chaos.

On the varied applications of their instruments, and the work they do, he adds that they are “always happy to get the opportunity to not only test our efficacy, but also to help out wherever we can.”