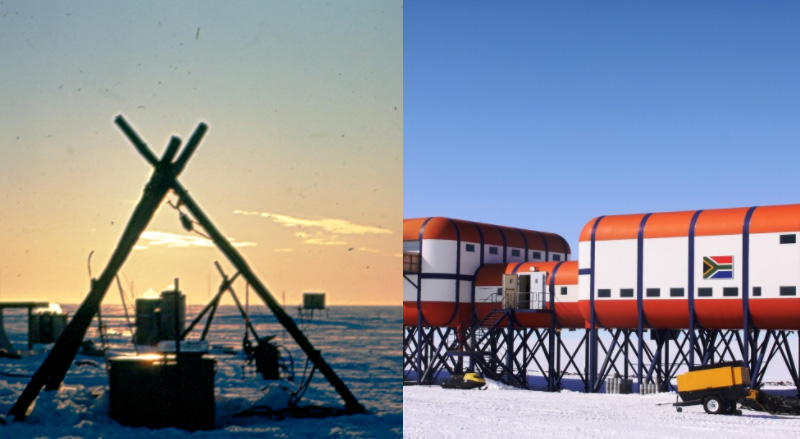 28 Mar Analogue in Antarctica: from whence we came

“When I first arrived we had to use morse code to send messages and were allowed a single nine-minute phone call a month.”

Antarctic bases then and now. South Africa has had a presence in Antarctica since 1948, and SANSA helps maintain critical research infrastructure on the southernmost continent to this day.

It was 1969 and Peter Sutcliffe had volunteered to spend winter in Antarctica.

On July 20th, he huddled around the radio with the rest of his team. Like many all over the world, they were tuned into Voice of America, because Apollo 11 and its crew had just landed on the moon.

At the time, Sutcliffe was responsible for star observations, to find the azimuth (the direction of a celestial body from the observer).

“Because our base was on an ice shelf, it moved about two meters per week and was rotating slowly, so we had to do star observations regularly, but manually using log books.

“We had no electronics. Recordings were done on a sheet of photo paper that was changed every day and had to be developed. Calculations were done by hand,” he recalls. Today, GPS instruments would provide the same information in an instant.

How incredible then, says Sutcliffe, that humans set foot on the moon nearly 50 years ago. “It was an absolutely amazing scientific feat with the technology they had available. All the dials were analogue; with needles!

“I don’t think people today can appreciate how incredible it was.”

Although Sutcliffe had over-wintered at the South African National Antarctic Expedition (SANAE) base purely because he thought it would be exciting, the experience unearthed a passion for space science; he devoted the rest his professional career to SANSA.

Since then, several other SANAE over-wintering bases have been established in Antarctica to conduct space physics research as part of the South African National Antarctic Programme (SANAP). SANSA is a key player in SANAP with several ongoing space science research projects collecting data from instruments distributed across southern Africa, Antarctica, Marion Island and Gough Island. In fact, SANSA operates 80% of the research equipment located at the SA base in Antarctica.

Antarctica holds a fascination for many people and has done for centuries. It is not just a hostile environment in which research teams study obscure phenomena. It is a “barometer” against which the rate and effects of climate change and global warming can be measured. This is why most developed and some developing countries have bases in Antarctica, and why it is vital for scientists to continue their research despite having to cope with the challenges of working in the coldest, windiest, driest, least populated and most remote part of the world. South Africa is the only African country to have a permanent base in Antarctica, and is one of the original signatories of the Antarctic Treaty.

The SuperDARN radar is part of an international network of 35 radars used to study the ionosphere  and aurora (that colourful light show that plays in the polar night sky as solar wind particles interact with the earth’s magnetic field).Kosch leads the SuperDARN radar team, and says they will soon publish two world-first discoveries.

The first relates to using the HF radars as a riometer, which detects high-energy radiation from solar storms entering the atmosphere. The second relates to tracking the effects of solar storms on the density of the upper-atmosphere, which affects the economic lifetime of satellites.

The Antarctic Space Weather Programme is now headed up by Dr Stefan Lotz. Mr Jon Ward, who has spent several summers and winters in the polar cap, leads the engineering team, while Kate Niemantinga is in charge of data assimilation.

More engineers and researchers are constantly in training, says Kosch. “Every year we send two people to SANAE and one to Marion Island. Many of our students are completing MSc or PhD degrees at SANSA or at universities, for example the University of Kwa-Zulu Natal,” says Kosch.

Over the last decade, in addition to permanent staff, around 50 SANSA volunteers, researchers, engineers and postgraduate students have spent time at the SANAE base to conduct space research, maintain research equipment and monitor space weather. An overwintering team lives at the SANAE base for 14 months, and a takeover team stays for three months of the summer to assist the new incoming team to take over from the outgoing team.

Kosch adds that several new instruments will soon be installed at the base to expand SANSA’s research infrastructure, including an all-sky aurora colour TV camera at SANAE, and mesospheric ozone radiometers (MOSAICs) at both SANAE and Marion Island. Marion Island will also get two new riometers and an upgraded magnetometer.

Sutcliffe, comparing these advanced technologies to the basic magnetometers and other analogue instruments they had available at the SANAE base half a century ago, says it would be like comparing a village hut to a 5-star hotel.

Today of course, like most of the world, the SANAE over-winterers have access to advanced satellite communication technologies, and stay in touch with colleagues and family using email, Face-Time or any number of channels.

This is thanks, in no small part, to much of the space weather research conducted in the Antarctic through SANAP.