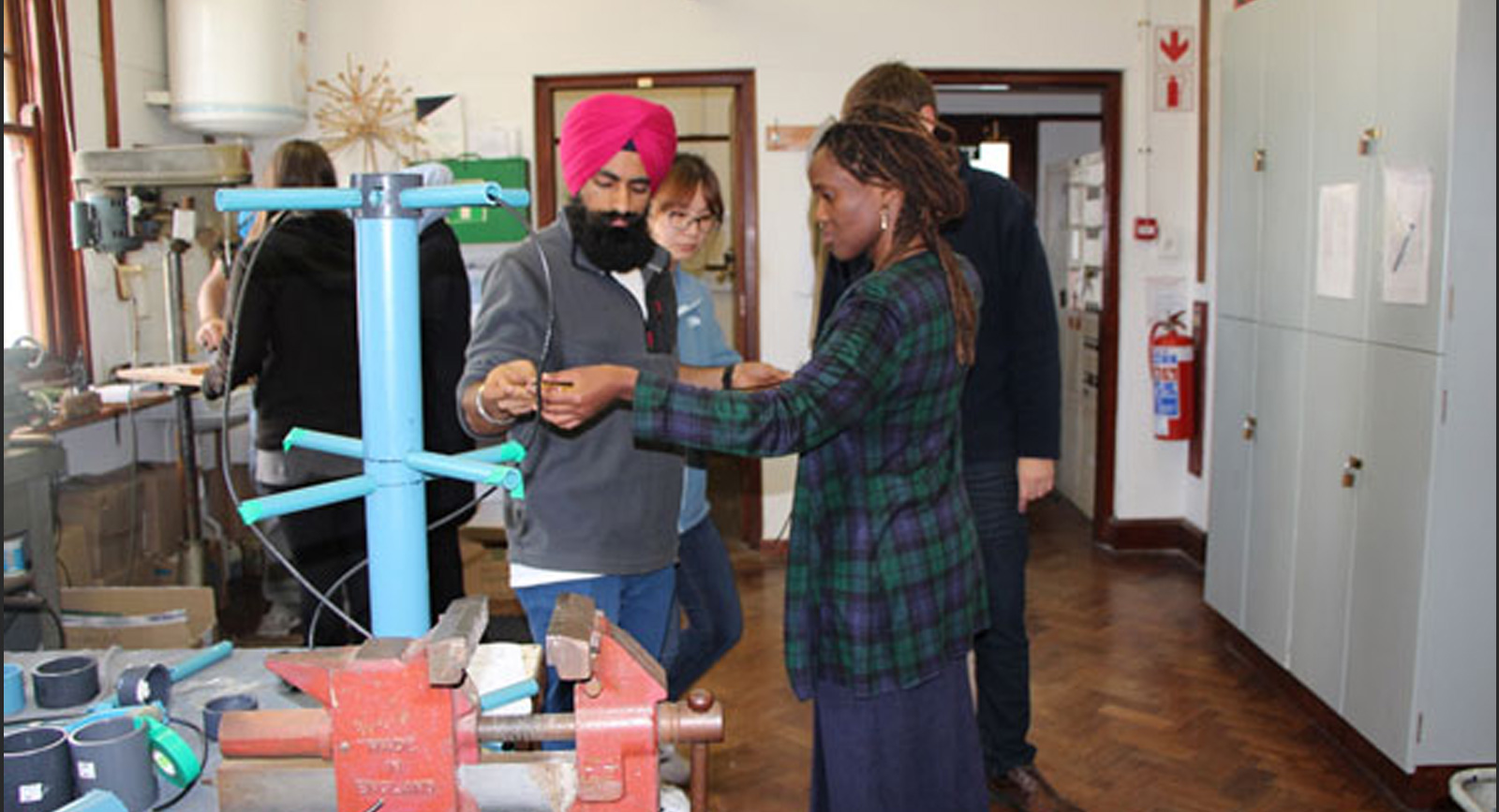 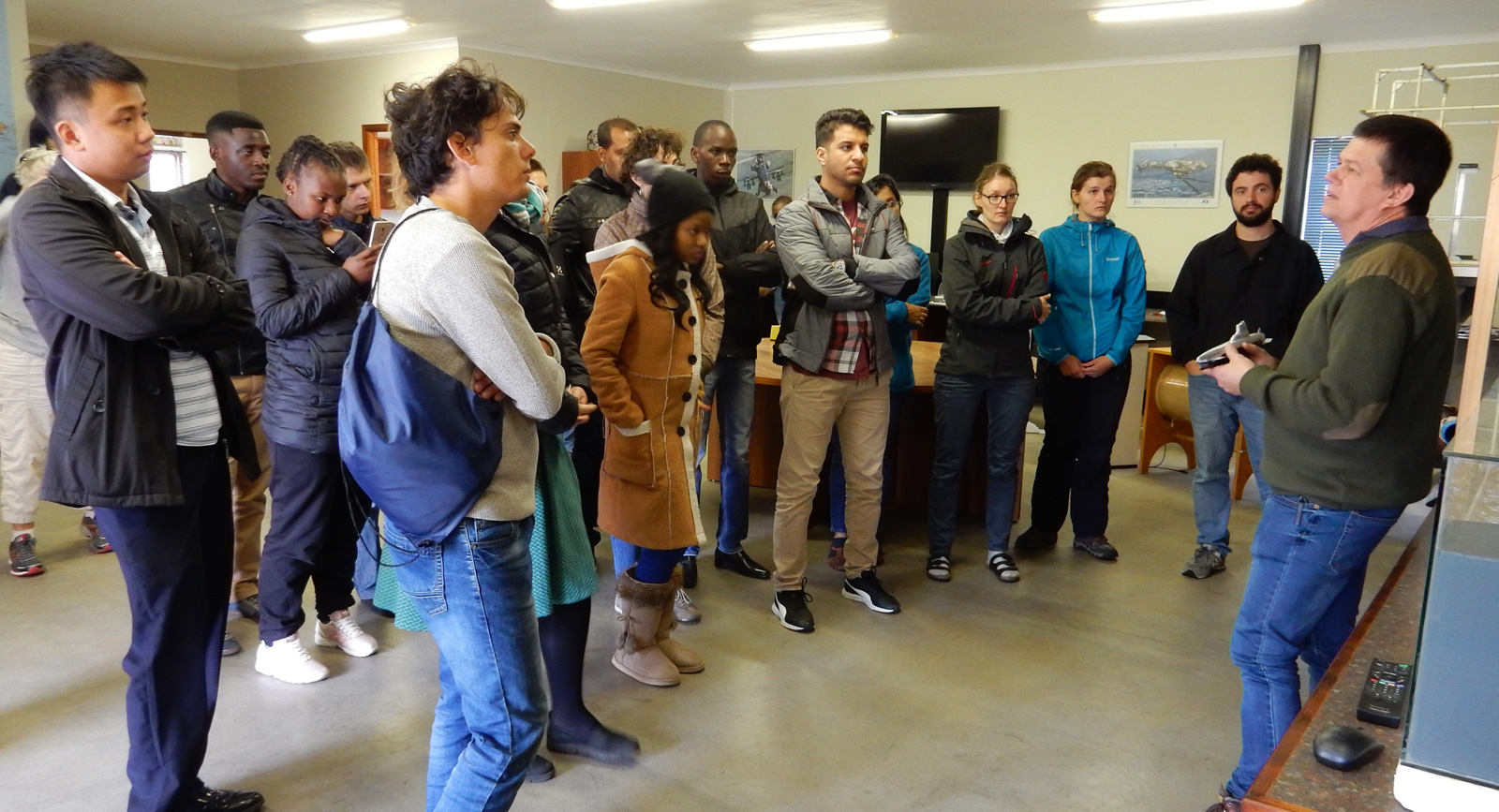 Students from around the world gathered at SANSA Space Science for the Third IAGA Winter School.

The internationally renowned International Association of Geomagnetism and Aeronomy (IAGA) Conference took place in Cape Town this year, and SANSA was there in force to represent Space Science in SA.

With major space science projects like the Square Kilometre Array (SKA), the MEERKAT telescope, the South African Large Telescope (SALT), and SANSA’s Space Science facilities, South Africa is an ideal location for an international conference of this calibre.

The projects focused on fluid theory studies of waves in space plasmas; building a software-defined radio receiver antenna; analysing the eruption and propagation of coronal mass ejections from the Sun; and a satellite drag experiment involving a quadrocopter, tennisball, potato gun and a few unfortunate spuds. 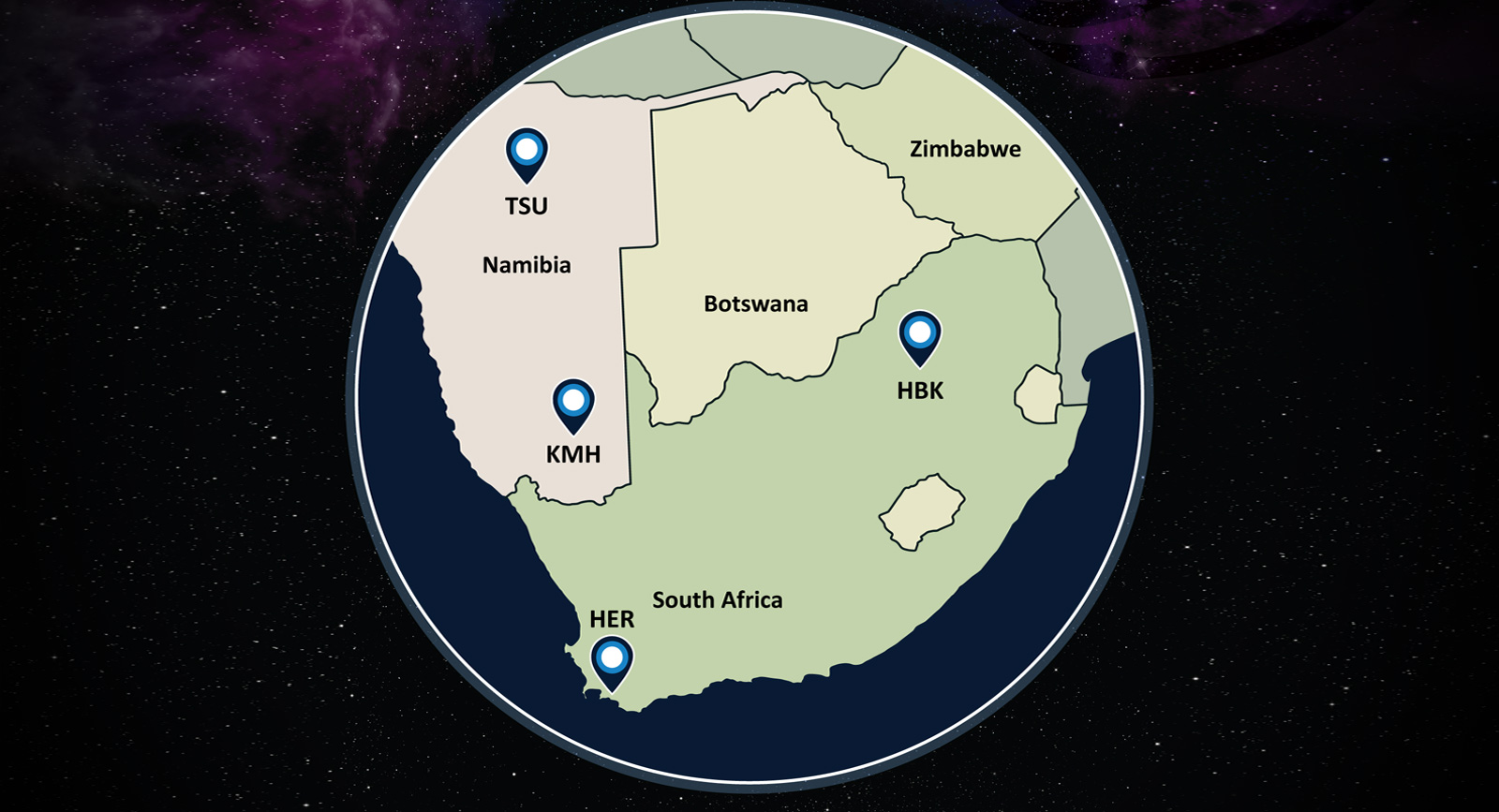 A map of Southern Africa showing the positions of SANSA’s 4 INTERMAGNET observatories HER, HBK, KMH, and TSU which provide real-time data on the Earth’s magnetic field.

“Attracting this prestigious event to local shores has certainly positioned South Africa as a relevant and desirable destination for events on the annual space research calendar,” says SANSA Chief Scientist, Prof Mike Kosch. “The success of the event means that we can only look forward to hosting many more similar events in years to come.”

SANSA also hosted the international Space Weather Camp – a collaboration between SANSA, the University of Alabama in Huntsville (UAH) and German Aerospace Centre (DLR), where 8 students from each country can learn about various aspects of space science.

The first leg of the SWC 2017 was hosted by the Centre for Space Plasma and Aeronomics Research (CSPAR) at the UAH in Huntsville, USA and focused on solar physics, solar dynamics and heliospheric physics. SANSA hosted the second leg in Hermanus from 10 to 21 July, where the focus was on space weather, ionospheric physics and geomagnetism.

“The Space Weather Camp covered a number of important space science topics, especially those related to space weather, an area of research which is equally relevant to both developed and developing nations due to our increasing reliance on space-based systems and our continued use of high-frequency communication,” says Dr Stefan Lotz, SANSA Researcher and SWC Co-ordinator. “Initiatives like these are crucial for building the skills needed for the future and to answer important scientific questions”.

The 2020 Space Operations Conference will be held at the Cape Town International Convention Centre.

SANSA won the bid to host the 16th International Space Operations Conference in 2020 in South Africa for the first time. This prestigious event has been held biennially the world over since 1990. SANSA has actively pursued the opportunity to showcase South Africa’s capabilities of hosting this international event for a number of years.

The consistent excellence of SANSA’s space operations product and services offerings and the country’s successful hosting of a number of memorable international events over the last decade and more have helped make this winning bid a reality.

The Space Ops conferences foster technical and management conversations on all aspects of space mission operations. They attract technologists, scientists and managers from the international space mission operations and ground systems community, as well as representatives from global and local space agencies, commercial operators, academic and research institutions and industry.

SANSA researchers are determining the characteristic energy of precipitating electrons within black and anti-black auroras. This is done by imaging the anti-black auroras with two cameras using different optical filters and comparing their relative brightness. The images are registered using the background star field, and the absolute image brightness is calibrated using selected stars. The calibration from the photon count into electron energy is done using the EISCAT incoherent scatter radar. Researchers expect to find that the black/anti-black auroras contain electrons of lower/higher energy compared to the background field.

The SuperDARN radar network is used to measure various space science phenomena, including measuring the density of the thermosphere.

SANSA researchers are developing a new technique to use the SuperDARN HF radar system to measure the neutral density of the thermosphere. This is done by observing the variability of the ion velocity, which then translates into the ion-neutral collision frequency, which relates to neutral density. The new technique is a variation of a similar technique developed successfully by a SANSA researcher for incoherent scatter radars. This is important as it provides a technique for determining the measurement of the changing density of the thermosphere due to geomagnetic storms, which affects satellite drag and therefore the operational lifetime of a satellite which has economic consequences.