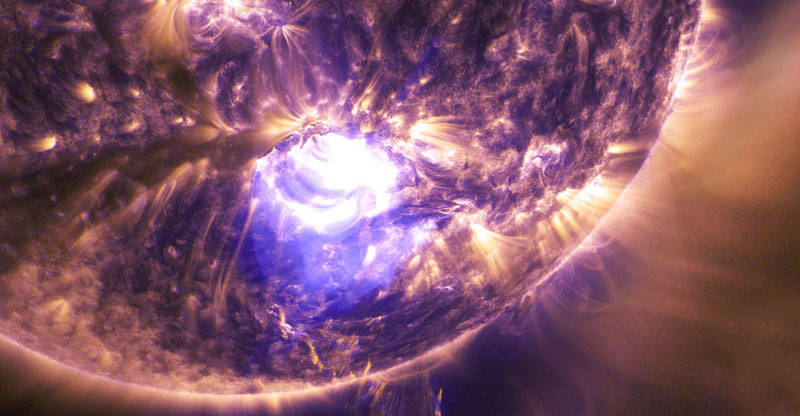 Our life-giving star, the Sun put on an unforgettable show this September when it erupted in two massive flares, the second of which was the strongest in over a decade. Keeping a close eye on the Sun’s activity, SANSA sent out warnings about the coming geomagnetic storm that threatened high frequency (HF) radio and satellite communication such as satellite TV and GPS across large parts of Africa.

On the 6th of September, the Sun let out a solar flare weighing in at X2.2, from active region 2673. Just as sungazers were getting excited, the same region erupted 3 hours later with a whopping X9.3 flare, so powerful that space scientists at the South African National Space Agency (SANSA), and the rest of the world scrambled to put the word out about this powerful disturbance. The intensity of the radiation caused HF radio blackouts across the daytime side of the Earth that affected communications over Africa, Europe and the Atlantic Ocean.

Solar flares are giant explosions on the surface of the Sun that occur when twisted magnetic field lines suddenly snap, releasing massive amounts of electromagnetic energy into the solar system. This energy can wreak havoc on the electronic systems the world has become dependent on for global communications and navigation, from the simple phone call to the life-saving Global Positioning System (GPS). This poses a particular threat to commercial aircraft navigation systems.

Different views of the X9.3 flare from Sept. 6, 2017. On the left, it flashes in a blend of 131 and 171 angstrom light. On the right it shows light in both visible and 304 angstrom extreme ultraviolet wavelengths, revealing both sunspots visible on the Sun’s surface and the flare in the solar atmosphere. Credit: NASA/GSFC/SDO.

Both flares on the day clocked in at the highest of five categories (A, B, C, M, and X) used to rank solar flares, based on their intensity. In this way, the X2.2 being closely followed by the X9.3 was a major event in this cycle of the Sun, which has an 11-year cycle with periods of low and high solar activity.

Beautiful as these events can be seen video below they carry a sting – high energy charged particles that spew out into space are also associated with solar flare events.

One minute video showing the two X flares on September 6, 2017. The second was an X9.3 flare – the largest of the solar cycle. Music: “Networked” from Killer Tracks Credit: NASA/GSFC/SDO.

When CMEs erupt, charged particles travel at breakneck speeds (around 1200 km per second, or 100 times faster than the speed of a bullet), but not as fast as the X-rays from a solar flare which take just 8 minutes to reach us on Earth. The CME particles left the Sun on 6 September 2017 and reached the Earth on 8 September, where they sparked a strong geomagnetic storm as they hit the Earth’s magnetic field.

This gif shows both the X2.2 and the X9.3 flares that the Sun emitted on Sept. 6, 2017. The imagery was captured by NASA’s Solar Dynamics Observatory and shows light in the 131 angstrom wavelength. Credit: NASA/GSFC/SDO

A geomagnetic storm is a disturbance caused by the charged particles’ interfering with the Earth’s magnetic field, which can affect high frequency (HF) radio communications, power grids, navigation systems such as GPS, and communication systems such as DStv and internet connectivity. As expected, this geomagnetic storm measured at G4 caused moderate disturbances on the Earth’s systems over a 48 hour period.

This gif shows the X9.3 flares that the Sun emitted on Sept. 6, 2017. The imagery was captured by NASA’s Solar Dynamics Observatory and shows light in the 171 angstrom wavelength. Credit: NASA/GSFC/SDO 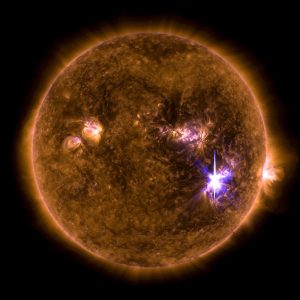 An X9.3 class solar flare flashes in the middle of the Sun on Sept. 6, 2017. This image was captured by NASA’s Solar Dynamics Observatory and shows a blend of light from the 171 and 131 angstrom wavelengths.

Thanks to the Earth’s protective magnetic field, known as the magnetosphere, space weather luckily cannot harm humans and other life forms on Earth.

Just when space weather experts thought the Sun had eased up on its explosive behaviour, solar activity persisted with a solar proton event in the same region on 10 September

“A ‘proton storm’ occurs when particles (mostly protons) emitted by the Sun are accelerated by CME shock waves” said Mpho Tshisaphungo, SANSA Space Weather Centre Manager. “Protons can have very high energies due to their speed and can pose a radiation threat to astronauts, particularly during space walks. Proton storms also increase radiation dose of the crew and passengers on transpolar flights and cause communication disruptions over the polar areas.”

A coronagraph from SOHO LASCO C3 before (left) and during (right) the September 10th proton event. These particles can also affect satellites electronics, as well as reduce their solar panel efficiency and increase the noise in star-tracking systems.

These particles can also affect satellites electronics, as well as reduce their solar panel efficiency and increase the noise in star-tracking systems

“SANSA kept a close eye on these solar storms and issued warnings and alerts to key stakeholders such as Eskom and SANDF,” said Tshisaphungo. “We also talked to the media to keep the public updated on solar events. 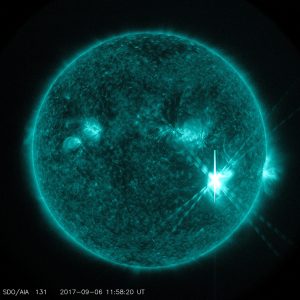 An X9.3 class solar flare flashes in the middle of the sun on Sept. 6, 2017. This image was captured by NASA’s Solar Dynamics Observatory at 11:58:20UT and shows light in the 131 angstrom wavelength. Credit: NASA/GSFC/SDO

SANSA is host to the only Space Weather Regional Warning Centre for Africa which operates as part of the International Space Environment Service. The Space Weather Centre conducts real-time monitoring using data from NASA and ESA space weather satellites, as well as SANSA’s ground based instruments located across Southern Africa. The centre forecasts space weather and provides a range of services to national power facilities, the South African National Defence Force and other clients.