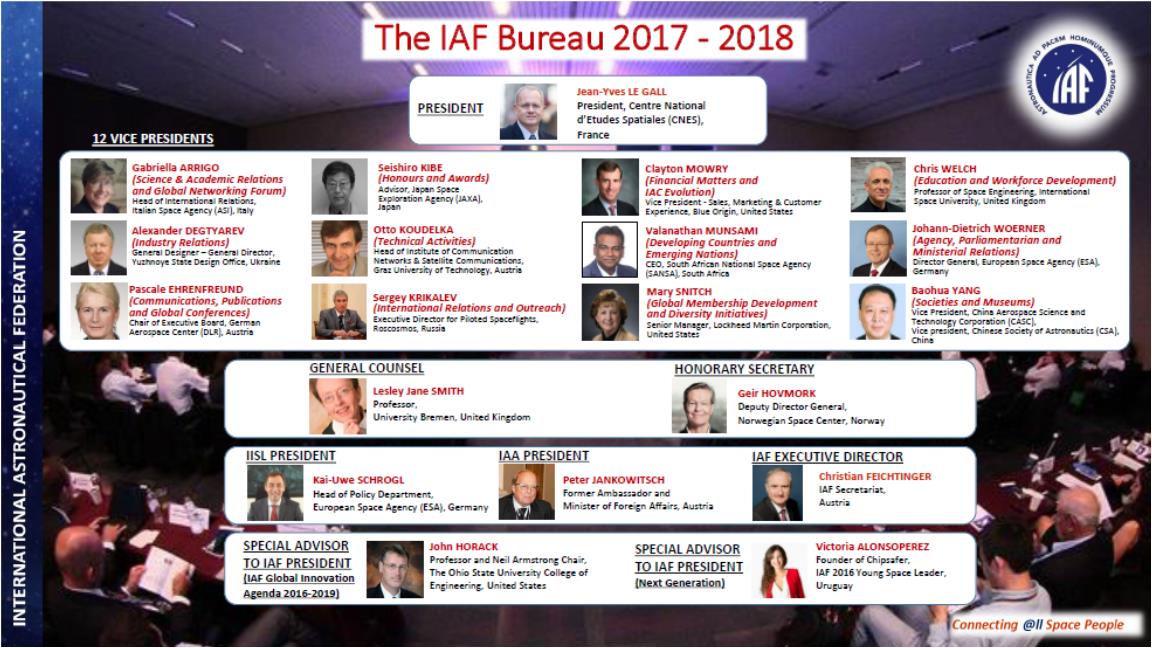 Posted at 08:34h in News by Vaneshree Maharaj

The International Astronautical Federation (IAF) was founded in 1951 to foster dialogue between scientists around the world and support international cooperation in all space-related activities. It is the world’s leading space advocacy body with over 300 members including all key space agencies, companies, societies, associations and institutes across 66 countries.

Annually the Federation makes changes to the Elective Officers at the IAF Bureau to accommodate the growing number of space nations and organisations and to enable an exchange of knowledge, skills and influence amongst all members. These volunteer officers are elected by the IAF General Assembly, in accordance with procedures established in the IAF Constitution and By-Laws.

Over 40 administrative and technical committees support the Federation in its mission to advance knowledge about space and to foster the development of space assets by facilitating global cooperation. This year the IAF received 11 valid nominations for IAF Officers to fill the 4 Vice President positions available to serve the Federation from September 2017 for a three-year period. During the 68th International Astronautic Congress held in Adelaide, Australia, during the last week in September 2017, Dr Munsami was elected as one of the 4 Vice Presidents. Although his portfolio will in all likelihood relate to Developing Countries and Emerging Nations, this is still subject to confirmation from the IAF.

Dr Munsami is the first African and South African to wear the VP hat at the IAF and is determined to raise the visibility of the country and continent during his tenure amongst these influential global space nations.