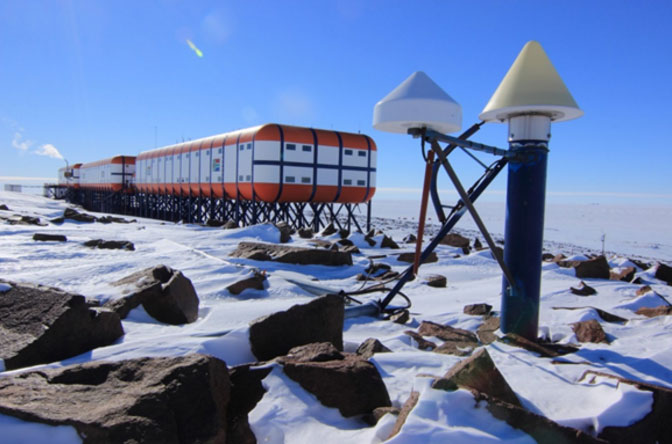 You find yourself caught in a devastating blizzard, away from the safety of your Antarctic base camp – your only means of navigation your Global Positioning System (GPS) device. Your GPS receiver has to communicate with satellites in space via the ionosphere to keep you from falling into deep crevasses, and should you call for help, your rescuers must know exactly where you are. So what if the GPS is wrong?

Antennae of the GPS and Novatel Scintillation receivers at SANAE, the South African research base in Antarctica. Data from these instruments is used to improve the accuracy of satellite navigation in polar regions where overland travel depends solely on GPS navigation.

This situation, where a few meters’ error can mean injury or death, is one of the reasons why researchers collect GPS data on the frozen continent of Antarctica. Dr. Pierre Cilliers, a senior space physics researcher at SANSA, is working with colleagues in Italy as part of the DemoGRAPE team to improve GPS navigation through gaining a better understanding of how the ionosphere responds to space weather, and the impact this has on GPS accuracy. The ionosphere is the layer of charged or ionised particles in the upper atmosphere of the Earth which can distort signals from GPS satellites in space.

Cilliers has been working with research organisations all over the world on a technique to get more value from existing GPS data, collected by several GPS receivers in Antarctica. The GPS data was originally intended for geodecy purposes, but Cilliers and his team hope to use it to better understand the dynamics of the ionosphere over Antarctica by using GPS data for investigating a phenomenon known as ionospheric scintillation.

Ionospheric scintillation is caused by fluctuations in the ion density of radio signals such as GPS which traverse the ionosphere. Such fluctuations interfere with both satellite navigation (GPS) and high frequency communication signals. “If you are busy with an important observation, making a geographic survey, flying a plane or steering a ship into harbour, scintillations can significantly increase the error of your GPS from a meter up to several hundred,” he says. The same effect occurs in Antarctica.

Using new algorithms and comparisons with dedicated scintillation receivers, ionospheric scintillation indices can be derived from existing conventional GPS data. With the repurposed GPS data, Cilliers and his team hope to expand their database of when and where scintillations in the region occur and use this data to make more accurate forecasts of space weather impacts on the ionosphere. “The name of the game in space weather is to be able to forecast scintillation conditions using models which are statistical and physical in nature, and thus avoid travelling by GPS when large navigation errors are likely to occur.”

SANSA’s Space Weather Centre is continuously improving its ability to do long-term predictions of behaviour of the ionosphere, and this requires more accurate models. “To develop such models you need lots of data,” says Cilliers.

As the signal fluctuations caused by scintillations not only affect GPS signals, the communications industry could also make use of the predictive technology Cilliers is helping develop.

The SANSA Space Weather team is also working on a global collaboration that will make traversing the Antarctic safer by improving GPS navigation. Understanding scintillation over this region is important as we increasingly rely on GPS signals to avoid environmental dangers.