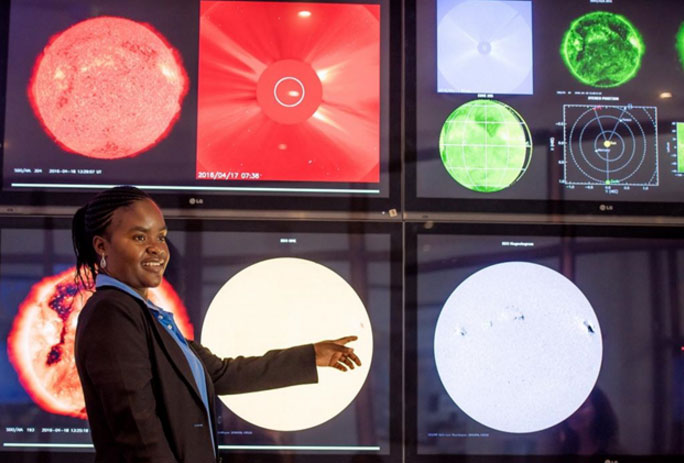 A severe space weather storm could cost the US tens of billions of dollars a day through electricity blackouts, communication failures and disruption of commercial aviation, according to a recent study. SANSA Researcher, Dr Rendani Nndanganeni says that South Africa needs to be better prepared for such events.

“In the UK, space weather is listed on the National Risk Register – it’s regarded as a disaster,” says Nndanganeni. “But in South Africa, it is not yet included in the Disaster Management Act.”

“Once we have more data we can get a better idea of the economic impact of space weather in South Africa and can work with industry to determine ways of mitigating the impact,” says Nndanganeni. It’s an important and pressing task: by 2018 the International Civil Aviation Organisation (ICAO) will require that national civil aviation authorities ensure that space weather risks are included as part of international flight plans.

The most pressing space weather concern is solar storms, caused by what are known as coronal mass ejections (CMEs) – Nndanganeni describes them as “a huge eruption of mass from the Sun”. They occur frequently when the Sun is at its most active. The “Halloween Storm” of 2003 demonstrated the effects that CMEs can have on our modern world – electricity grids went down, satellites were damaged, global navigation systems were affected, and communications were knocked out for up to 13 hours across North America, costing the US and Canada enormously.

High frequency and very high frequency radio communication, as well as ground- and air-based navigation systems, can be affected or knocked out entirely by solar storms. Delicate electronics can also be damaged, and radiation exposure poses a hazard for crew and passengers especially for long haul flights.

All of these effects can have serious consequences for pilots, crew and passengers, but the impact doesn’t end there – space weather can have a major knock-on effect on airline companies and airports.

“You can’t isolate a single event, because the technological systems are so interdependent,” says Nndanganeni. “If an airline has to ground their aircraft, they need to make arrangements at great cost to the company for people that miss their connecting flights. If they make an emergency stop, they need to refuel the aircraft, which means additional hours of work for staff. So the industry needs to take all these factors into account.”

Nndanganeni is trying to build a model for South Africa that describes this interdependency, so that she can start to predict the effects of a space weather event on various areas of the SA aviation industry. At the same time, she is building relationships with the civil aviation authority, domestic airlines, and the international space weather risk community. If it sounds complex, that’s because it is.

“It’s very complicated, which is why it is important for me to work with all the key role-players,” says Nndanganeni. “I need to be able to engage with people within the aviation industry, who have first-hand experience in dealing with the effects of space weather.”

Her next step is to gather data to test and refine different models that have been developed by countries like the UK, Australia and USA. Once that has been done, she knows she needs to educate the aviation industry.

“We need to ensure the aviation industry understands the risks related to space weather, what to look out for and what to expect,” she explains. “SANSA will provide the necessary information to enable key decision makers to make informed decisions. We want to equip them, educate them and ensure they know what to look out for and can then decide on how best to mitigate the impact of space weather.”

The USA has estimated the economic impact of a severe space weather storm to range from USD ten billion to USD two trillion during the first year alone, with recovery times of four to ten years. Scaling this to an estimate for South Africa, these numbers could be translated to ZAR one to two trillion during the first year alone. While these examples only provide approximate costs of the impact they do illustrate the potential risk to the economy resulting from a space weather event.

If South Africa is to avoid the potentially devastating costs of space weather on the economy, then industry best be listening.