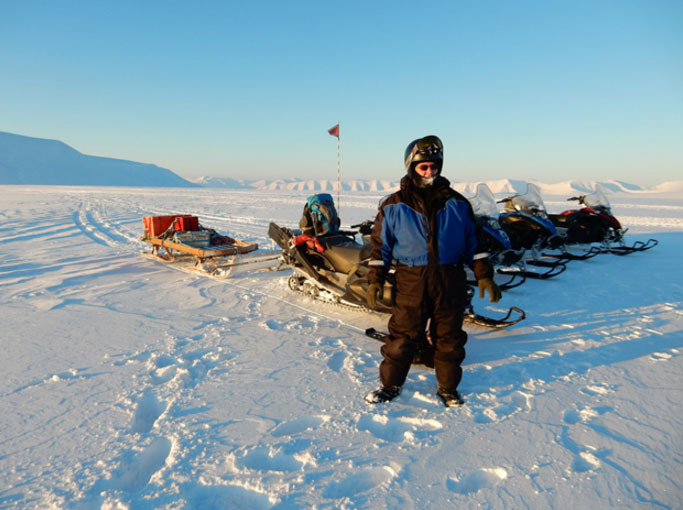 Gruelling Antarctic expeditions, encounters with polar bears in Svalbard, and a sheer love for the wild and cold reaches of our planet. You might think that Mike Kosch is a professional adventurer, or perhaps an extreme sportsman. But you’d be wrong. In fact, he’s the Chief Scientist for SANSA’s Space Science Programme and Professor at Lancaster University and University of the Western Cape.

Prof Mike Kosch preparing for an overland journey in Svalbard, Norway, where he was working on space science experiments at the EISCAT radar facility.

“Some of my colleagues might not approve, but I always say: if it’s not fun, it’s not worth doing,” says Kosch with a laugh. He came to his current job through his love for the snowy and inhospitable corners of the earth, a passion that was kindled by a neighbour at a very young age.

“Visiting Antarctica had always been in the back of my mind because I’d seen all these pictures from my neighbour and from engineers visiting my school,” he recalls. “After completing an electrical engineering degree, I was selected to spend a winter in Antarctica. It was a life-changing experience.”

After spending a year maintaining equipment designed to measure the unseen forces in the earth’s atmosphere, it was a natural progression for him to study further in the field of space science: a quest to understand how our planet interacts with its local space environment. This encompasses changes in the earth’s geomagnetic field and the ionosphere, and the effects of space weather on communication and navigation technology.

The last point illustrates why space science research is important – satellites, GPS systems, compasses and even power grids are all affected by space weather. Understanding these effects can prevent disasters and save money and lives.

“Our goal at SANSA is to provide space science research and services for Africa and beyond,” says Kosch. “Those services include forecasting and impact assessment of space weather events and compass calibration for aircraft for the whole of Southern Africa. We also host a wide suite of space monitoring instruments and equipment distributed across Southern Africa for local and international science and applications.”

Another major focus for SANSA is education and public engagement – of which this newsletter is a part. SANSA hosts Honours, Masters and PhD students, and runs a number of schools and camps for young researchers in collaboration with international space science research organisations. The SANSA Science Advancement Programme engages with over 12 000 learners and members of the public every year through practical science-based activities at the SANSA Science Centre in Hermanus or from the Mobile Space Lab. SANSA researchers regularly engage in outreach programmes and travel across the country to share their discoveries and exciting opportunities in space science and technology with learners in remote regions.

“As a publicly-funded organisation, we must ensure that taxpayers understand what we’re doing, why we’re doing it and what the benefits are for the country,” Kosch explains. “On top of that, we want to enthuse young people to pursue careers in space science and technology. Getting into science gives you the chance to travel the world, make exciting discoveries and contribute to the knowledge economy. Everybody in this field discovers something new, something that wasn’t known before. This is extremely exciting work.”

Kosch himself works on obscure atmospheric phenomena, such as sprites and black auroras. Sprites are bright flashes that occur in the upper atmosphere when gases become supercharged by lightning strikes – the same effect that lights up a fluorescent lightbulb. Black auroras are more mysterious – these are dark swirling patterns that sometimes occur alongside the regular aurora, both of which are caused by the solar wind interacting with the earths geomagnetic field. Even stranger, Kosch and his students have recently observed something called anti-black aurora – small patches of light that accompany the black aurora.

The black aurora can be glimpsed here in the sky as dark patches moving westward. Using special night vision cameras this video was recorded from Tromsø in Norway and formed part of research into black aurora by Prof Mike Kosch at one of the EISCAT radar facilities.

Kosch is involved in a number of international projects, such as experiments using the high-powered EISCAT radar system based in Norway, Sweden and Finland. The system is co-owned by 6 countries, including the UK and Japan, and Kosch is one of its leading scientists. EISCAT measures the physical properties of the near-Earth space environment like plasma density, temperature and velocity.

Kosch himself has developed a way to use EISCAT to study the effects of global warming in the atmosphere, where C02 and methane emissions are causing the atmosphere to contract. Kosch regularly travels to the EISCAT site on Svalbard Island near the North Pole – mainly for the science and teaching but also, he admits, for the dog sledding, snowmobiles and magnificent auroras. Through his international networks and association with Lancaster University, Kosch has opened the door for South African researchers and students to access the EISCAT facility.

Kosch’s excitement and wonder is obvious when he talks about space science. His passion and drive to ensure that South Africa is a leader in space science and technology for Africa is evident in everything he says and does.

“As instrument sensitivity goes up and signal-noise ratio improves, suddenly you find things that were always out there, you just didn’t know they existed. That begs the questions, what’s out there that’s in your face but no-one’s noticing?”

With Prof Kosch and his adventurer’s spirit at the helm, SANSA researchers and students are already making such discoveries, and are set for many more. You can read about some of their most recent findings in the rest of this newsletter.