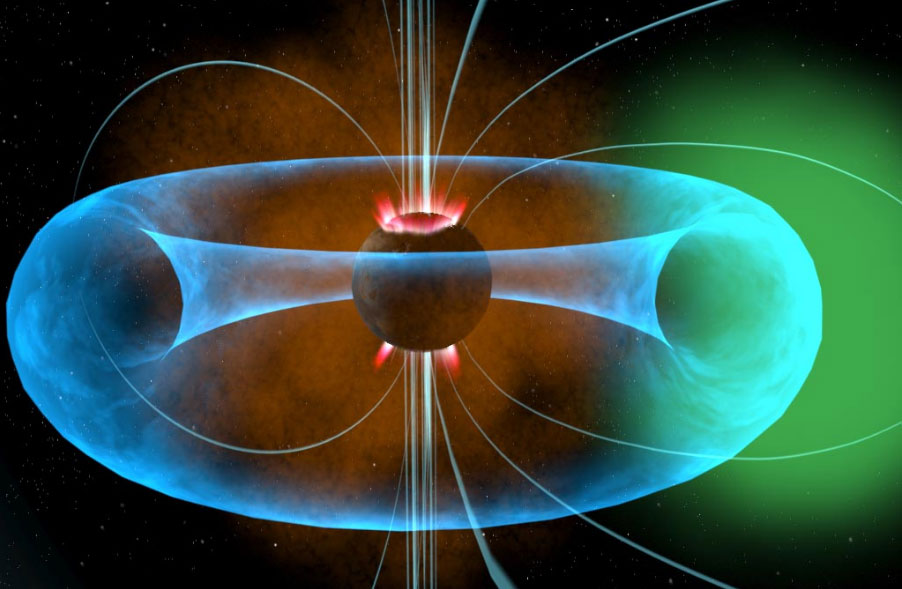 Over the past decades, rapid variations in the Earth’s magnetic field have occurred, highlighting the swirling dynamo at the Earth’s molten core, 3000 kilometres under the surface. Researchers at SANSA have been keeping a close eye on the latest of these geomagnetic jerks in the Southern Hemisphere.

Dr Pieter Kotzé is a space science research fellow at SANSA where his main field of research is the Earths magnetic field. He studies the internal and external magnetic field of the Earth and how it interacts with the solar wind, made up of charged particles coming from the sun. He does this research using data sets from four ground-based magnetic observatories in Southern Africa located at Hermanus, Hartebeesthoek, Keetmanshoop, and Tsumeb.

Kotzé explains that a geomagnetic jerk, such as the one he observed in 2014, is an abrupt change in the time variation of the magnetic field at a geographical location.

“Time variation can show a decreasing tendency for a few years then suddenly for a few months, it starts to change in an increasing tendency,” he says. He cordially points out that the geomagnetic jerk “is not referring to the people who work at the observatories.”

A plot showing the Hermanus Y component variation over function of time. Various jerks can be identified during 2007, 2008, 2010 2012 and 2014 where abrupt changes in the time pattern can be identified.

Comparing the data he collected with what the CHAOS-6 and POMME 10 field models had predicted, he found that they differ quite considerably from each other and the data he had gathered from the observatories. Kotzé believes that the inaccuracies of these models are because the modellers do not have enough accurate data to confine or restrict their models.

“The model is sort of an average but it is not perfectly correct,” he says. “In my paper, I pointed out to the community that they need more reliable data, particularly real-time data, to confine their models.”

“Going back in time, the models fit with observed data, but as soon as you get to the end-point it becomes a stretch of the imagination,” he points out.

On the global scale, this geomagnetic jerk is part of a bigger picture where in other parts of the world there is increase or decrease in these events. This chaotic behaviour is a feature of the magnetic field being generated by the dynamo effect from the swirling magma at the Earth’s core.

To visualise this, Kotzé describes the chaotic behaviour of a boiling pot of spaghetti which has the stringy pasta rise in some parts of the pot and sinking in others parts. This turbulent, chaotic, boiling pot of magma, is highly convective and highly conductive – the two conditions needed for a dynamo to operate.

Kotzé has observed similar geomagnetic jerks in other parts of the world, and how they spread out through the year 2014. He points out that these geomagnetic jerks seem to be migrating westward across the Earth. The South Atlantic Magnetic Anomaly is an example of this movement – it is a geomagnetic anomaly that used to be centred over the Tristan da Cunha island between Southern Africa and South America can now be observed over central Brazil in South America.

These results beg the question of what this might mean for the Earth. Should we be worried? Kotzé says we can rest easy.

“I think it is very interesting that the Earth’s magnetic field is trying to reverse its polarity,” he says. “It would be an interesting period to be alive because we would see the aurora on the equator almost on a daily basis.”

Such a polarity reversal would also cause problems for navigation, and the weaker magnetic field would increase the amount of radiation from the sun that reaches the surface. Still, Kotzé does not think that we need to panic.

“The reversals that took place a few thousand times in the Earth’s history have not coincided with periods of mass extinction,” he says. Just an interesting phenomenon for now, then.