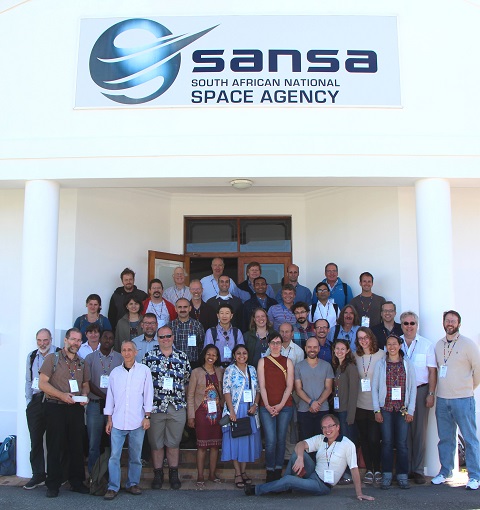 Posted at 12:19h in News, Space Science by Vaneshree Maharaj

Space science, specifically Extremely Low Frequency (ELF) and Very Low Frequency (VLF) radio waves in the magnetosphere and ionosphere, as well as space plasma and radiation belt phenomena, were topics of dynamic discourse recently between representatives from two international space science working groups at the 7th biennial VERSIM and Radiation Belt (RadBelt) Symposia in Hermanus. SANSA was selected to host the event, for the first time in Africa, from 19 – 24 September this year.

The synergy between VERSIM and radiation belt science led the organisers of both symposiums to attach several days of radiation belt discussions to the VERSIM meeting in Hermanus.

“The symposium covered a number of important space science topics relevant to both developed and developing nations. The broad international attendance (55 persons from 16 countries) illustrates that the important scientific questions in this field are global and widely interconnected,” said Prof Michael Kosch, Chief Scientist at SANSA in Hermanus and the principle investigator on the Sprite project.

Co-chair of VERSIM, Prof Jacob Bortnik, highlighted that the exceptionally high-quality magnetosphere and ionosphere data currently being collected by numerous satellites in orbit around the Earth and other planets has given rise to a truly unique time in the history of ELF/VLF science.

Since its establishment in 1975, the group has enjoyed a vast and diverse membership, currently having over 160 scientists from 26 different countries as active participants in the VERSIM group. At present, the focus of the group spans over a variety of topics that involve ELF/VLF waves, including the morphology and dynamics of plasma structures and boundaries, wave-particle and wave-wave interactions, wave-induced particle precipitation, wave propagation in magnetosphere and ionosphere, Sprites and the effects of lightning on the ionosphere.

IMPACT
Space Science researchers attend events such as the VERSIM meeting to stay abreast of the latest research into ELF and VLF radio waves since they are (a) natural sensors of the near-Earth space environment, (b) used for communication with submarines and (c) naturally produced in space and facilitate the production of high-energy electrons.

“The importance of these fields of research is that we gain vital insights into the dynamics of our near-earth space environment which enables us to forecast radiation levels experienced by satellites during space weather storms,” said Prof Kosch.

In its discussion sessions during the week-long event, the RadBelt working group looked at the observations, theory and modelling of the Van Allen radiation belts and other plasma populations and processes that influence radiation belt dynamics. All satellites that fly at high altitudes (for example GPS or geosynchronous orbits) must fly in or through the radiation belts, and these belts can even extend to lower altitudes and thus affect manned missions. Radiation is hazardous to human health and electronics. Understanding radiation belt dynamics helps to ensure that spaceflight remains a safe endeavour.

In addition to the science sessions, the delegates participated in outings such as a visit to a penguin colony and a tour of SANSA’s Hermanus facility, as well as wine tasting in the picturesque Hemel en Aarde Valley.

“These gatherings are important as they provide a platform to share ideas and showcase the latest research in our field. But even more important is to build a community, foster healthy work relationships and create collaboration between scientists who are separated by large distances and different cultures and disciplines. New ideas often lead to successful partnerships that last well beyond the meeting,” said Jacob Bortnik.

The IAGA/URSI* VERSIM working group promotes the exchange of ideas, information and experience between researchers world-wide through the study of ELF (300 Hz – 3 kHz) and VLF (3-30 kHz) radio waves in the magnetosphere and ionosphere.

The RadBelt working group resulted from the international workshops of the radiation belt sciences community held since 1994 to foster discussion on the observations, theory and modelling of radiation belts and their plasma populations and processes.