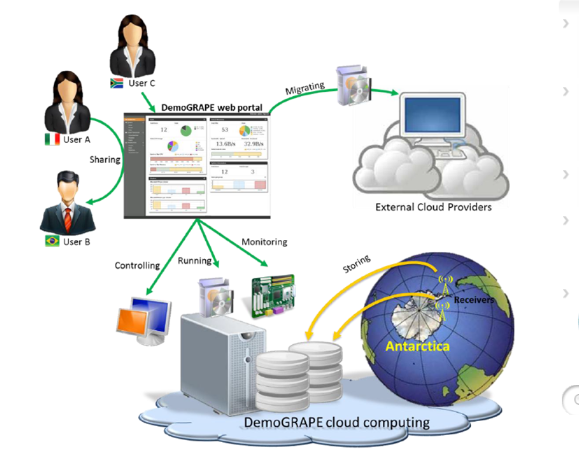 Posted at 06:58h in News, Space Science by Vaneshree Maharaj

Polar travelling in Antarctica may become significantly safer thanks to the DemoGRAPE instrumentation recently deployed at the South African Antarctic base, SANAE IV. In January 2016 these instruments recorded ionospheric scintillations for the first time along signal paths from the European Galileo GNSS network. The aim of this international initiative is to improve the accuracy of satellite navigation in the Polar Regions and develop new scientific and technological applications in Antarctica.

SANSA manages ionospheric scintillation receivers and GPS receivers at SANAE and has been a key collaborator in the DemoGRAPE project. During December 2015, our team at SANAE assisted the Italian National Institute for Geophysical and Vulcanological Research (INGV) and the DemoGRAPE team to install two new technology GNSS receivers and a new-concept data acquisition system to exploit GNSS software receivers to access ionospheric delay from the GPS (US) system of navigation satellites, as well as the Russian GLONASS and European Galileo satellites.

The data from the receivers feed into a Cloud-based (Internetbased) computing system to create a superior platform for data sharing among partner organisations and the scientific community. Three Cloud nodes have been setup, one each at SANSA in Hermanus, INPE in Brazil and INGV in Italy. The Joint Research Centre of the European Commission (JRC) supports the deployment of the new-concept of GNSS data acquisition.

SANSA provided vital support to the DemoGRAPE proposal, led by INGV in partnership with Politecnico di Torino and Istituto Superiore Mario Boella in Italy, to build a demonstrator of cuttingedge technology for the empirical assessment of ionospheric delay and ionospheric scintillations in the Polar Regions that affect the accuracy of satellite assisted navigation. Funded by the Italian National Programme for Antarctic Research, the DemoGRAPE demonstrator now contains new monitoring equipment installed at the South African and Brazilian Antarctic bases with the exchange of data via the Cloud computing infrastructure.

Reliably assessing ionospheric delay and ionospheric perturbations on transionospheric signals at high latitudes is also of great interest from a scientific/technological perspective for improving the reliability and accuracy of GPS navigation that is critical for overland travel in Polar Regions during hazardous weather conditions which can lead to white-outs with visibility distance dropping to a few metres.

SANSA will continue to collaborate with INGV and its partners in the DemoGRAPE group to fully realize the benefits of the proposed system by providing selected datasets and/or algorithms to support the development of the demonstrator.