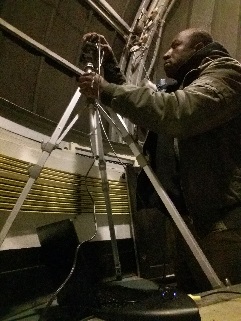 Posted at 06:19h in News, Space Science by Vaneshree Maharaj

The South African National Space Agency recently recorded the first images of Sprites from Sutherland on 11 January 2016. Triggered by lightning, Sprites are optical gas discharges from the top of convective thunderstorm clouds at an altitude of 50-100 km. 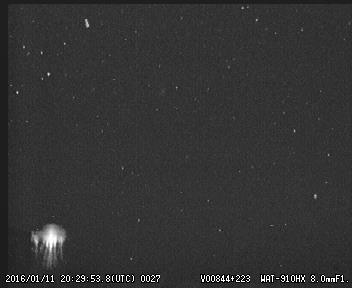 “Despite being easily visible, nobody has ever reported seeing spites over Southern Africa. We are extremely excited to have finally captured the first images of Sprites over South African skies,” says Prof Michael Kosch, Chief Scientist at SANSA’s Hermanus office in the Western Cape and the principle investigator on the Sprite project.

Using an NRF-funded night-vision TV camera the sightings were made possible from the South African Astronomical Observatory (SAAO) in Sutherland, one of the world’s darkest astronomical sites. The image shows the first South African observation of a “jellyfish” sprite, initiated by a single lightning strike, approximately 300 km north-east of Sutherland.

The other team members involved in this exciting first sighting were Nnadih Stanislaus, a Masters student at the University of Cape Town (UCT), who operated the night-vision camera that captured the sprite images and his supervisor, Prof Peter Martinez of the UCT SpaceLab in the Department of Electrical Engineering. “It was an amazing experience; seeing in real-time what has never been recorded over southern Africa. I felt like a hunter!” says Stanislaus.

Sprites occur in the upper-atmosphere and are very bright but brief flashes of light lasting between 1  10 milliseconds. They are always initiated by large cloud-to-ground lightning strikes during major thunderstorms. Predicted in 1925 by Nobel Laureate, Prof Wilson, they were first observed by chance in 1989 over the USA and have subsequently been observed frequently from spacecraft, aircraft and the ground. Given the millions of lightning strikes that occur annually, the rarity of the reported sightings is surprising.

“These observations pave the way for more comprehensive observations at multiple wavelengths to improve our understanding of how sprites are triggered and their effects on the upper atmosphere,” says Martinez.

The geographic location and infrastructure of the SAAO facilities in Sutherland have been identified as one of the most suitable sites to provide the ideal visibility conditions for recording Sprites in South Africa. SAAO has entered into a four year agreement with SANSA to host a state-of-the-art Optical Space Research (OSR) Laboratory which will be used for further research into Sprites as well as new research in atmospheric gravity waves.

“We will be using the OSR initially to study atmospheric gravity waves that will provide us with greater insight into the dynamics of the Earth’s middle atmosphere,” says Prof Kosch. “Such knowledge is important because the middle atmosphere couples space weather from above to terrestrial weather below”.

Image to the left shows, Nnadih Stanislaus, a Masters student at the University of Cape Town who captured the first images of sprites in South Africa using a night-vision camera.

Devastation of Cape Town fire as seen from space
NEPAD/ SANSA partnership targets growth and development in Africa
New head at helm of Space Agency
SANSA PARTNERS WITH THE GAUTENG PROVINCIAL GOVERNMENT
From Africa, for Africa – contributing to science and the world community