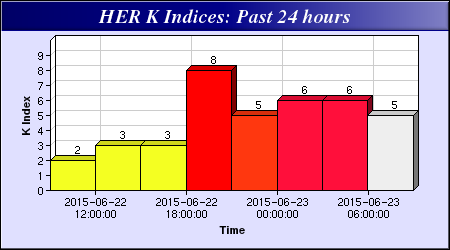 Posted at 11:24h in News, Space Science by Admin_Sansa

A CME was observed on June 21 at 02:48 UT with an average speed of ~ 976 km/s. The CME was associated with an M-class solar flare from active region 2371. The arrival time of the CME on Earth was June 22 at ~ 18:00 UT which resulted in severe geomagnetic conditions (NOAA scale – G4 storm level). The planetary K index reached a maximum of Kp = 8 and local Hermanus K index also reached a K = 8. Systems that may be affected are GPS, HF and satellite communications. For more info see https://spaceweather.sansa.org.za/