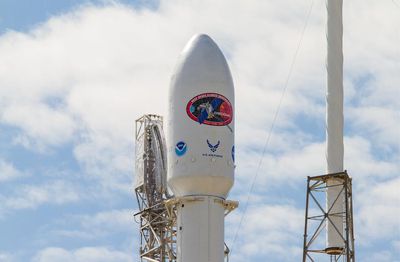 Posted at 12:09h in News, Space Science by Vaneshree Maharaj

After 15 years and multiple delays, the Deep Space Climate Observatory (DSCOVR) spacecraft is on its way to deep space. Launching atop a Space Exploration Technologies (SpaceX) Falcon 9 rocket, DSCOVR leapt off the pad at Space Launch Complex 40 and took to the skies at 6:03PM ET on 11 Feb 2015.

DSCOVR is a joint collaboration between NASA, NOAA, and the US Air Force, each responsible for one-third of the $340 million price tag. NOAA served as the mission manager, NASA handled the science instruments, while the Air Force selected the vehicle that would propel DSCOVR into deep space. Based on mission requirements, the Air Force selected SpaceX ‘s Falcon 9 rocket as the launch vehicle. 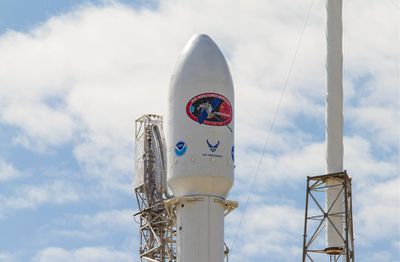 A close-up of the DSCOVR payload

DSCOVR started as an Earth science mission. Now, though, it’s our planet’s new line of defense against solar storms. The refrigerator-sized satellite – stationed one million miles from Earth – is designed to provide advanced warning against solar flares that could result in damaging geomagnetic storms.

Geomagnetic storms can flood power grids with additional electric currents, potentially blowing transformers and even resulting in complete power grid failure. Communication systems, such as GPS and cell phones, and transatlantic flights can be disrupted by these storms. Space weather, like Earth weather, is ranked on a scale of low to high-risk. The Geomagnetic scale ranges from G1 (low-risk) to G5 (high-risk). Any storm ranked G3 or higher has the potential for damage on Earth.