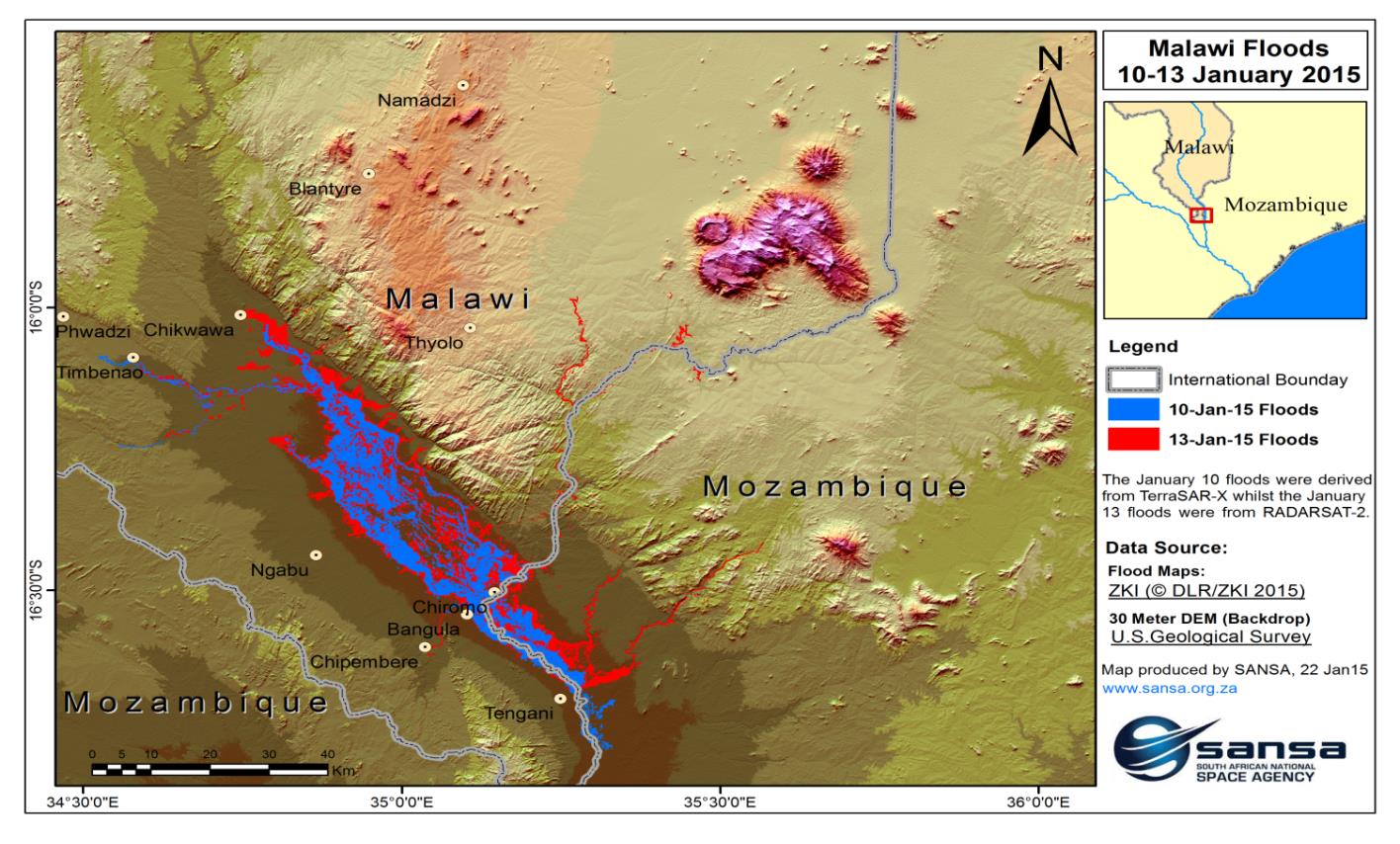 Posted at 17:16h in Earth Observation, News by Vaneshree Maharaj

The Southeastern region of Africa has been affected by severe rainfall causing what is most likely the severest natural disaster of 2015. Malawi, Mozambique and Madagascar have been seriously affected with at least 260 people killed and 260 000 left homeless in all three countries combined (Bloomberg News, 19 January 2015). The international Charter on Space and Major Disasters was activated on January 8th and 18th for the floods which occurred in Malawi and Madagascar respectively. Satellite data was used to map the extent of the floods and assess the impact of the disaster to infrastructure and human livelihood.

Due to cloud cover over the affected region, RADAR data covering the floods in Malawi was acquired by TerraSAR-X and RADARSAT-2. During the period between January 10-13, the water level rose considerably as indicated in figure 1. As a result, 176 people were killed, 200 000 were displaced and 11 000 homes destroyed by the disaster (CNN, 18 January 2015).

A detailed analysis of the flood maps (Figure 2) near Bangula and Chiromo villages indicated that the flood waters caused serious disturbance to the transportation network by cutting off road and railway access that connects the eastern and western sides of Shire River. 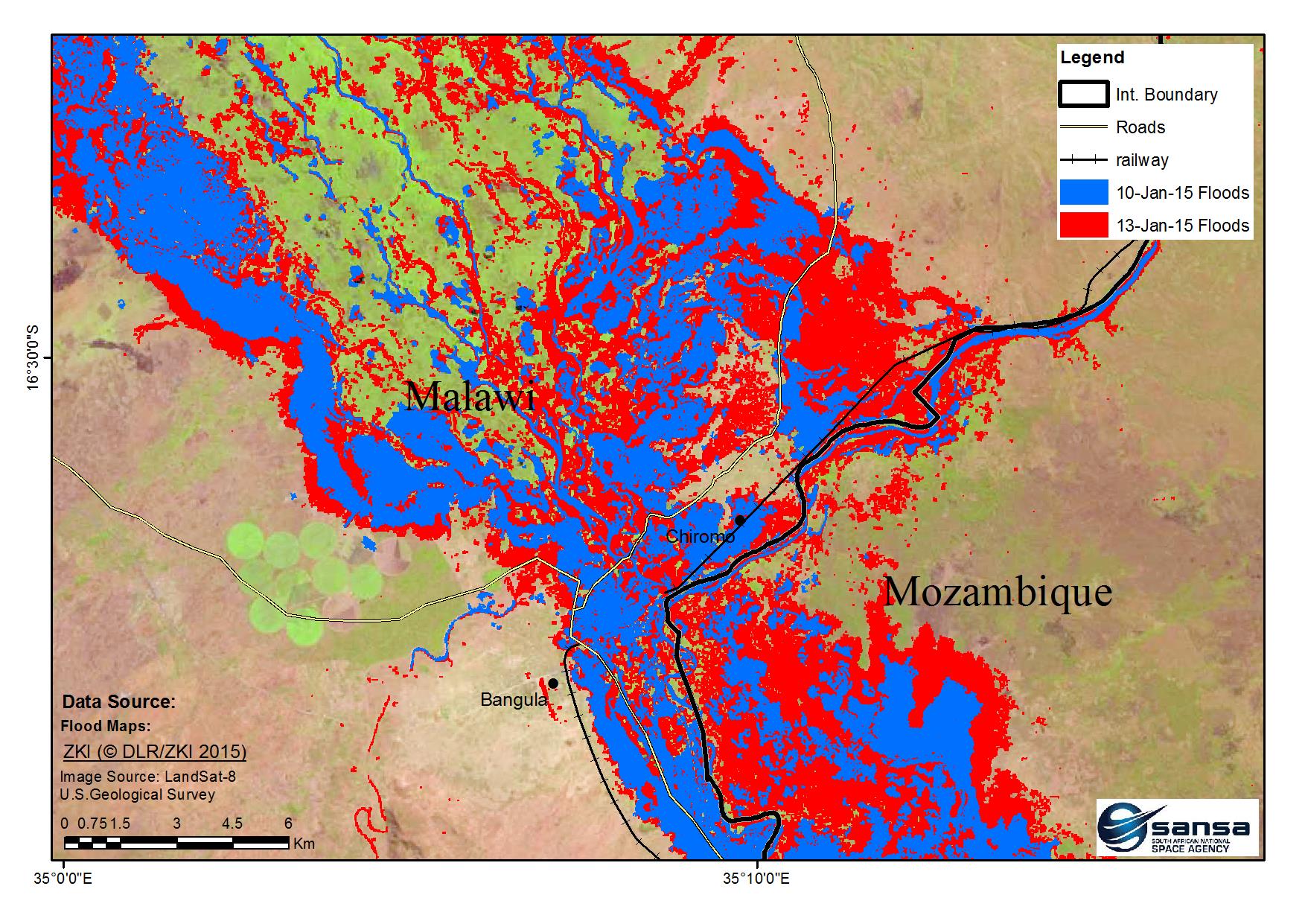 In Madagascar, on 16-17 January 2015, tropical storm Chedza made its way towards western coast of Madagascar from the Mozambique Channel associated with strong winds and heavy rains. The Moderate Resolution Imaging Spectroradiometer (MODIS) sensor on board Terra satellite captured storm Chedza on the morning of 16 January. 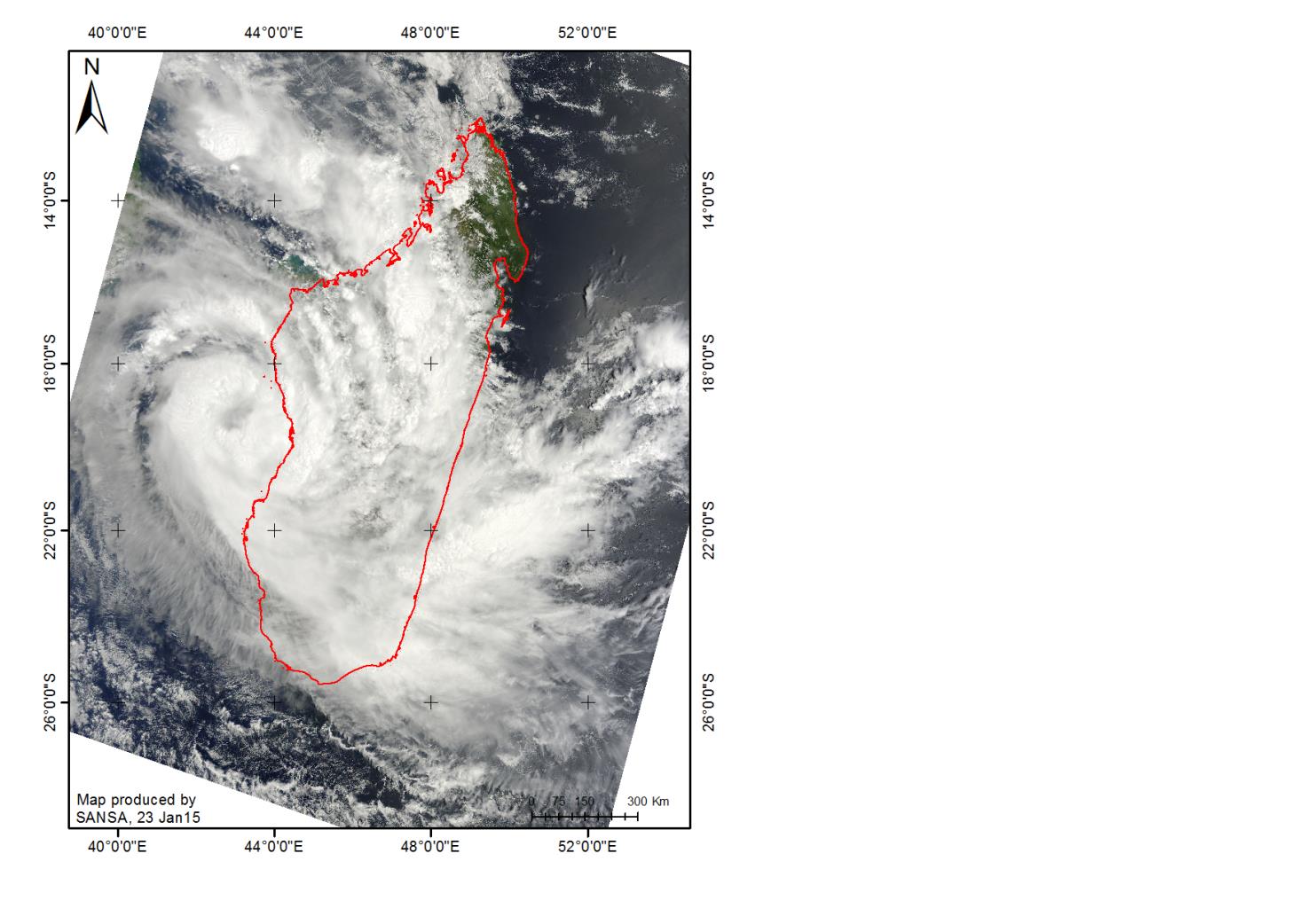 As the storm gained strength, it continued to wreak havoc on different parts of the country. The Risk and Disaster Management Bureau in Madagascar requested the acquisition of satellite images over the disaster stricken areas by triggering the International Charter on Space and Major Disasters (Sertit, 21 January 2015). On 20 January, LandSat 8 satellite captured images showing flooded areas of Madagascar along the Mozambique Chanel. Figure 4 shows a series of images comparing the affected areas in Madagascar before and after the floods.

Figure 4: Before and after images of the affected areas in Madagascar along the Mozambique Channel, mage Source: U.S. Geological Survey-LandSat 8.

According to the National Disaster Management Office in Madagascar, storm Chedza claimed 13 lives, destroyed more than 3 000 homes and displaced about 80 000 people.