Posted at 06:56h in News, Space Science by Vaneshree Maharaj

Space is not as empty as you think!

While the name suggests that space is empty, that is far from true. Matter released by our sun and space weather events fills the area between our planet and surrounding bodies, and is known as space plasma. Plasma particles are the fourth state of matter (solids, liquids, gasses) and have an effect on how radio transmissions travel through space. It is important for scientists to understand what those effects are. Plasma is always confined by a magnetic field such as the sun’s magnetic field, the interplanetary magnetic field or the Earth’s magnetic field.

Three projects offer a deeper understanding of the world of space plasma.
A digital upgrade to the South African SuperDARN radar in Antarctica, the construction of a High Frequency Direction Finding (HF/DF) interferometer array, and the tricky business of uncoiling a wire in space will all come together to give SANSA extended capabilities in space weather monitoring and space plasma studies.

When Gert Lamprecht, SANSA’s Research Support Unit Manager, arrived at the South African Antarctic base, SANAE IV, he and his team were told they would have three weeks less than planned to install SANSA’s new high frequency digital radar system.

The radar is part of an international network of 33 radars distributed over the northern and southern polar regions, called the Super Dual Auroral Radar Network (SuperDARN). The new digital radar is going to replace the existing 17 year old analogue radar, which was due to be decommissioned in 2012, and will provide a more versatile, reliable and state-of-the-art research platform for scientists to study the ionosphere and other space weather related phenomena.

Antarctica is the optimal place for space weather research instrumentation because the Earth’s magnetic field lines converge at the poles and act as a funnel for space plasma to travel into the Earth’s atmosphere. A single pair of radars in the network can measure the position and movement of ionospheric plasma in an area of approximately 4 million square kilometres.

Two engineers from Lamprecht’s team will stay behind on the ice for 14 months to monitor and maintain the suite of space monitoring instruments that SANSA operates from the base. Despite the delay and the hostile Antarctic environment, the project is still on schedule and the team’s enthusiasm has not dampened. 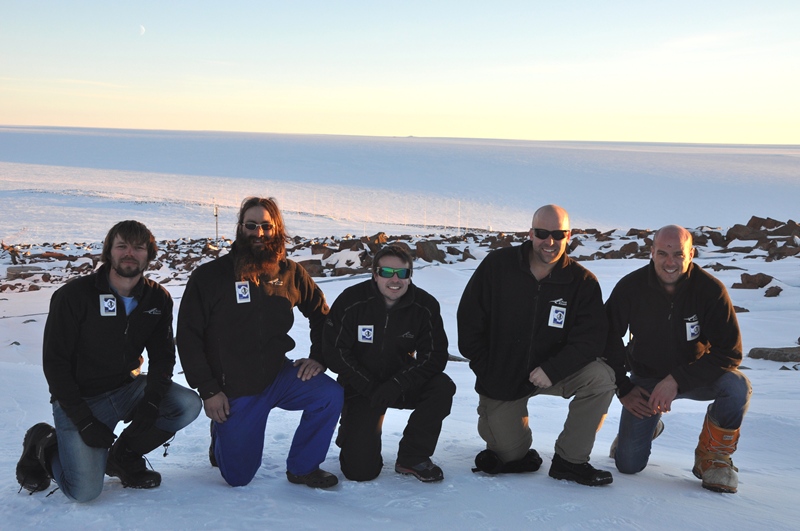 The team who installed and helped develop the new SuperDARN Radar at the Antarctic research base SANAE IV. They each performed the role of SANAE IV Radar Engineer over the last 5 years.

Part 2: Uncoiling an antenna in space

While the new SuperDARN radar is being installed in Antarctica, back on the home front SANSA is managing an experimental aspect of South Africa’s first CubeSAT mission. The experiment aims to determine how to broadcast a long wave radio signal using an antenna on a satellite that can fit in the palm of a hand.

The satellite had to have an antenna of 10.5 m attached to it. That’s a big feat for a small satellite. SANSA’s Dr Ben Opperman and Dr Robert van Zyl from the Cape Peninsula University of Technology (CPUT) devised a rolled up antenna which is coiled like a fishing rod reel.

Now TshepisoSAT has been launched, the 0.01 mm thick wire must be slowly uncoiled into a straight antenna. With a small tip mass placed at the wire’s end, the satellite will be put into a spin, using the Earth’s magnetic field and two small electromagnets fitted to the CubeSAT. This process should slowly uncoil the wire, which is similar to a piano wire in rigidity. If it bunches up or bends too much, it will fail.
Between two and ten centimetres of antenna wire will be uncoiled each day. If all goes well, the antenna should be straightened out over a period of several weeks.

TshepisoSAT is the first nano-satellite to be constructed in South Africa. Funded by the Department of Science and Technology, it was designed and built by postgraduate students at the French South African Institute of Technology (F’SATI) at CPUT, in collaboration with SANSA. This approach offers students a unique learning experience and prepares them to participate in the South African space industry.
The satellite is currently healthy and with most tests completed it is ready to begin its experiment. When extended, the antenna will transmit a simple radio signal that can be received by the Hermanus HF/DF array and the SuperDARN radar in Antarctica, as well as the rest of the SuperDARN network.

This will ensure there is comparable data and enable the team to determine what effect the plasma in space is having on the travelling radio wave as it propagates through it. Once the effects of the plasma are known TshepisoSAT can act as an HF beacon, and since its location in space is accurately known, it can be used to calibrate the SuperDARN radar. 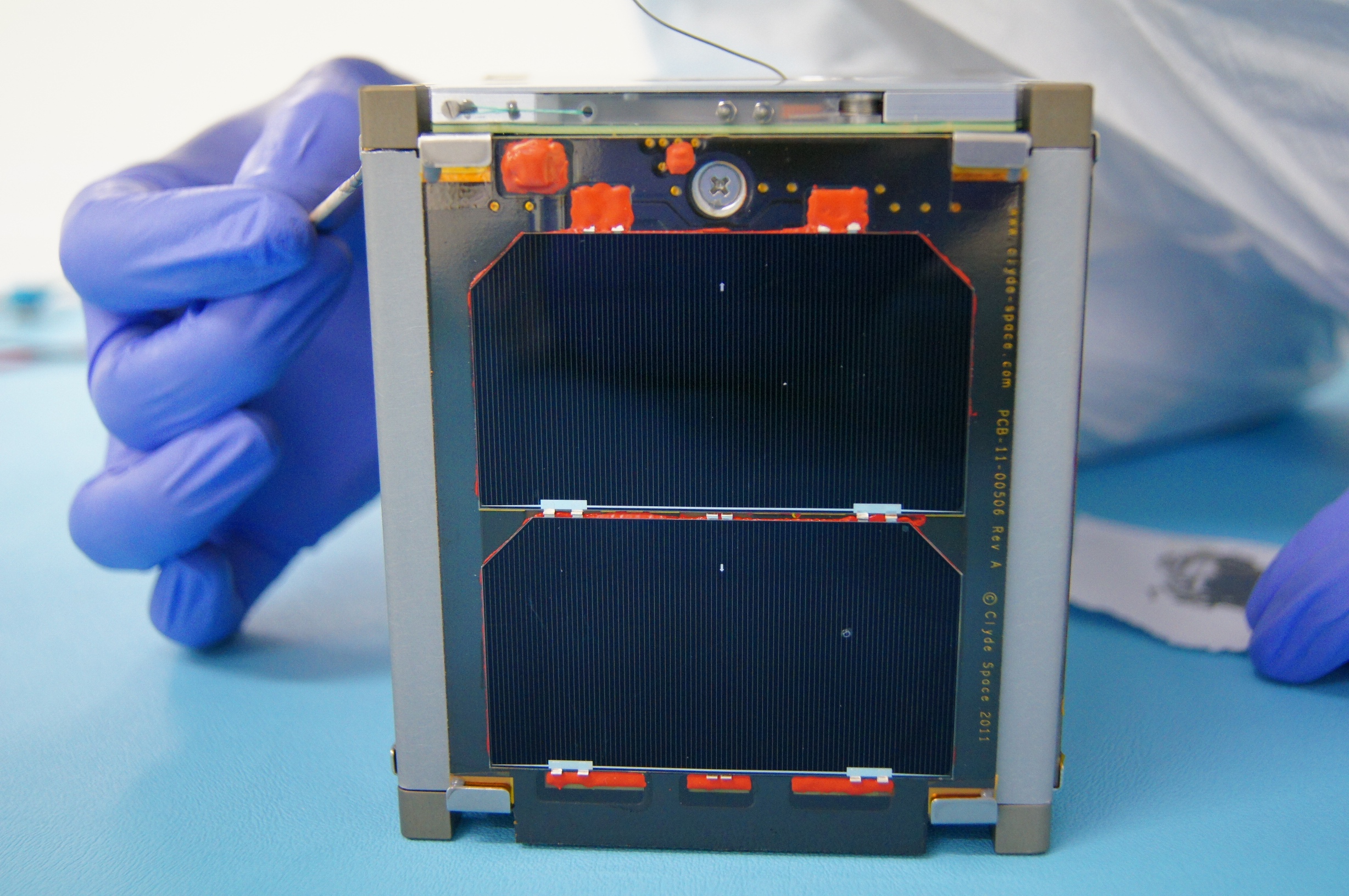 Electric plasma in space has always affected radio frequencies transmitted to Earth from man-made satellites  in the same way glass diffracts rays of light through windows. SANSA scientists aim to better understand just how plasma diffracts radio waves. This experiment brings together the SuperDARN radar at SANAE IV, the special coiled-up antenna mounted to TshepisoSAT and a high frequency direction finding (HF/DF) interferometer array under construction at the Hermanus facility.

The project has started small  three separate antennas laid out in the shape of an ‘L’ are being constructed on an area of 10.5 m. Each antenna consists of two square loops one metre in diameter. The mini-array should take six weeks to complete and there will ultimately be seven antennas, the last four of which will be built when the test signals from TshepisoSAT’s special antenna are confirmed as successful.

TshepisoSAT’s transmissions will be received from a known position in space by either SANAE IV or the Hermanus HF/DF array. The difference between the measured and the true incoming angles of the radio wave at either antenna locations should supply the team with comparable data. This data should be enough to determine just how the signal was refracted by the plasma in space. Experience from the project will be used to calibrate SANSA’s SuperDARN radar and the resulting data will be invaluable to gain a better understanding of how radio signals propagate through space.