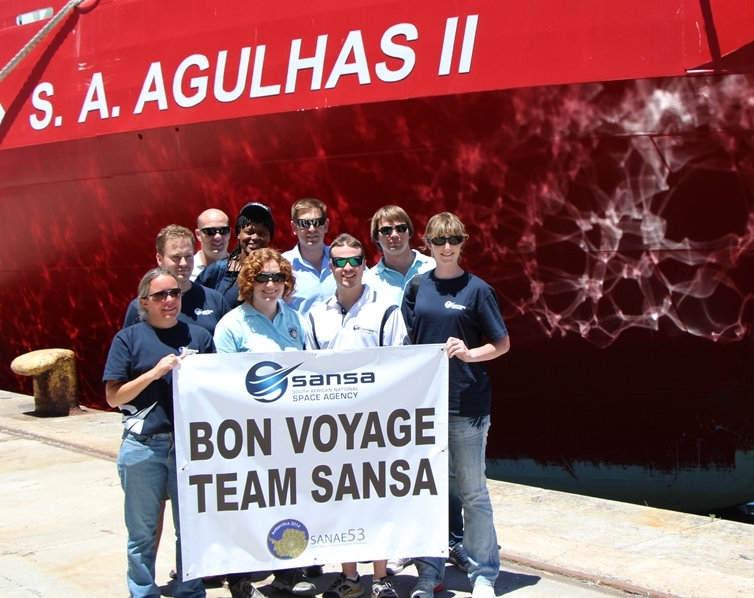 Posted at 07:18h in News, Space Science by Vaneshree Maharaj

The South African National Space Agency (SANSA) bid farewell to a team of scientists and engineers as they departed on the SA Agulhas II for Antarctica on 28 November 2013. The 53rd Antarctic expedition marks a milestone for the Space Agency with the commissioning of a new High Frequency Digital Radar system which will be installed at the South African Antarctic research base.

The radar forms part of the Super Dual Auroral Radar Network (SuperDARN) an international network of over 30 radars used to monitor the dynamics of space weather. “Studying the weather in space is an important area of research as it helps us understand how to protect technology on earth and in space from the devastating effects of solar activity” said Dr Lee-Anne McKinnell, SANSA Space Science MD.

While Antarctica may be the coldest, driest and windiest places on earth it is one of the best locations to conduct space weather research due to the earth’s magnetic field lines converging at the pole and acting as a funnel for space plasma to travel into the earth’s atmosphere. Just like police radars that send out beams which reflect from vehicles, the SuperDARN radars measure the position and speed of plasma in the Earth’s ionosphere.

Once the team arrives in Antarctica they will spend six weeks installing the new radar system and perform routine maintenance on other equipment used to monitor the space environment. “The new radar will go a long way in contributing to the SuperDARN network as it is one of the most advanced, state-of-the-art digital radars in the world” said McKinnell.

Monitoring the space environment enables SANSA to deliver a vital service to the nation by providing forecasts and warnings on space weather activity, playing an important role in protecting satellite technology, communication and navigation systems as well as electrical power grids.