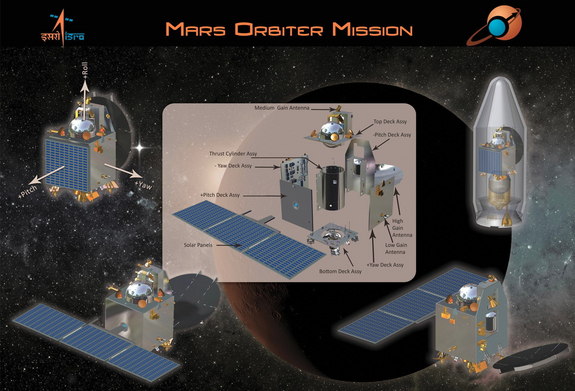 Posted at 08:01h in News, Space Operations by Vaneshree Maharaj

India successfully launched the PSLV-C25 rocket carrying the MOM spacecraft at 11:08 CAT on 5 November 2013. At 12:53 CAT, SANSA’s Hartebeesthoek (HBK) ground station acquired the satellite signal and is providing the craft with Transfer-orbit Support services (TOSS) shortly after injection. “The HBK station is ideally located to be the closest point to the satellite per pass,” says Pandey Shyam, an ISRO scientist stationed at HBK for the TOSS duration. “The satellite is in its elliptical orbit, and several manoeuvres are planned before the final Mars injection manoeuvre which should take place around 30 November 2013,” Shyam adds.

“We were able to perform orbit determination by ranging operations from the ground station; to place the Mars Orbiter in the correct orbit to reach Mars, and we will continue to perform various commands and maneuvers from HBK.”

MOM will orbit the Earth for 20-25 days before embarking on a nine month expedition to Mars. This is India’s first Deep Space mission, and is aimed at establishing the country’s technological capabilities as well as orbiting the Red Planet looking for signs of life and studying the planet’s surroundings.

The Mars Orbiter has five unique instruments on board: a Lyman Alpha Photometer, a Mars  Exospheric Neutral Composition Analyser, a Mars Colour Camera, a Thermal Infrared Imaging Spectrometer and a Methane Sensor for Mars. “What makes this mission different to others is the Methane Sensor. If Methane is detected, it could be an indication of life,” concludes Shyam.

If the Orbiter reaches Mars successfully, India will become the first Asian country to have a spacecraft orbiting the red planet and only the sixth agency to launch a spacecraft heading for Mars.

SANSA is pleased to be part of this mission. “By continuously upgrading our facilities, SANSA strives to provide the space industry with a range of services to accommodate various support requests,” says Tiaan Strydom, International Business Manager at SANSA Space Operations. “We successfully supported NASA’s Mars Science Laboratory (MSL) launch in 2011 and we look forward to being part of many more large-scale investments and opportunities.”