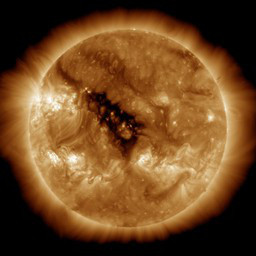 11 Oct The Sun’s magnetic field is about to flip

Posted at 14:25h in News, Space Science by Vaneshree Maharaj

As we go about our everyday lives here on Earth, seldom do we think about our nearest star the Sun. Life on Earth would not exist without it and yet we take it for granted each day. In the next two or three months, something special will happen to our life giving star. The magnetic field that emanates from the Sun and extends throughout the entire solar system will reverse in polarity.

The Sun’s magnetic field changes polarity approximately every 11 years. It happens at the peak of each solar cycle as the Sun’s inner magnetic dynamo re-organizes itself.

While Scientists are able to predict approximately when it will happen, they cannot explain how or why the polar reversal occurs. Dr Pieter Kotze, SANSA Science Research and Applications Manager, says that science has yet to fully unravel this cosmic mystery. “Polarity reversals in stars like the Sun, and planets like Earth, have been observed throughout history, but how and why they happen remains a mystery,” he said. “Even using sophisticated computing techniques and complicated mathematical equations have not yet brought us closer to answering this puzzling question.”

Scientists have been tracking the Sun’s polar magnetism since 1976 and they have recorded three grand reversals, with a fourth on the go. A reversal of the Sun’s magnetic field is, literally, a big event. The domain of the Sun’s magnetic influence (also known as the “Heliosphere”) extends billions of kilometres beyond Pluto. Changes to the field’s polarity ripple all the way out to the Voyager probes, on the doorstep of interstellar space.

Dr Pieter Kotze describes the reversal, “The Sun’s polar magnetic fields weaken, go to zero and then emerge again with the opposite polarity.” This doesn’t happen all at once – the polarities reverse gradually over a few months, with one hemisphere leading the way. “At present we observe that the northern hemisphere on the Sun has already changed its polarity,” Kotze said. “We expect the southern hemisphere to follow soon.”

The reversal will likely be complete within in the next couple of months and the second half of Solar Max will be underway. While this may be a milestone for our starry neighbour, the effect on earth is minimal.
Amateur scientists and stargazers do not have much chance of muscling in on the phenomenon, as no effects will be detectable either on Earth or in the night sky. According to Kotze, the instruments used to measure the Sun’s changing magnetic field are too sophisticated for the average amateur to have at his disposal.