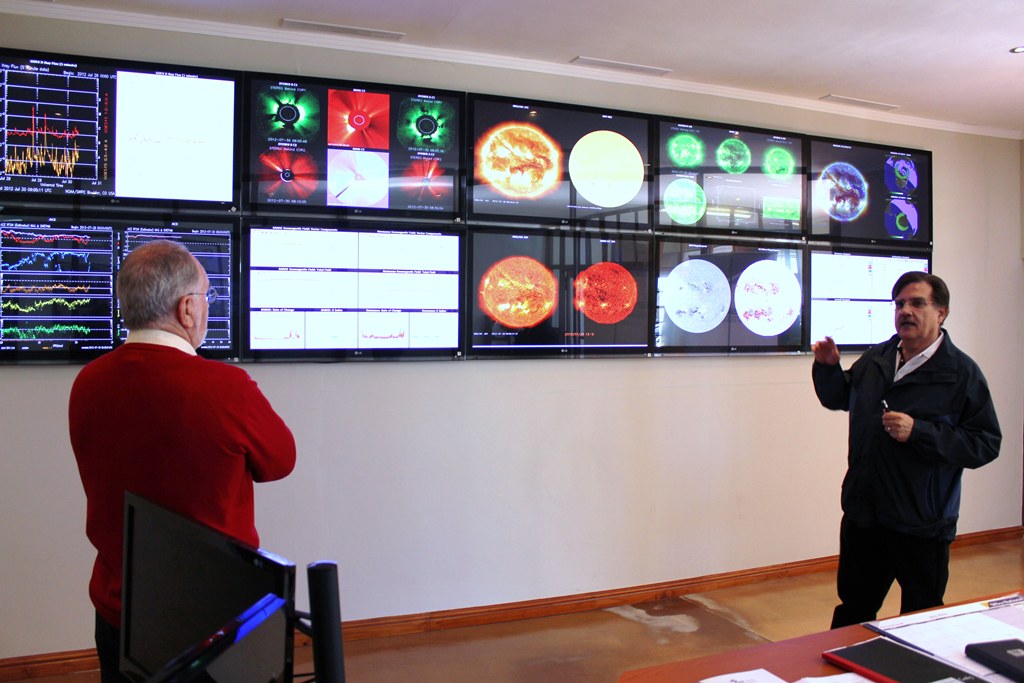 Posted at 08:16h in News, Space Science by Vaneshree Maharaj

So what’s up with the sun why is solar max proving to be a little on the mini side? An interesting public lecture entitled “Solar Max – Why No Big Bangs Yet?” presented by Kobus Olckers, SANSA Space Weather Officer, on 29 January 2013 at SANSA Space Science.

The sun goes through an 11-year sunspot cycle indicating levels of solar activity. Solar minimum which refers to a period when the number of sunspots is lowest bringing less solar activity and solar maximum when sunspots are most numerous usually bringing more frequent solar activity and a greater likelihood of solar flares. “However during the last year of solar maximum the sun has been unusually quiet” explained Olckers during his presentation to members of the public, SANSA staff and students.

The Scientific Committee on Solar Terrestrial Physics (SCOSTEP) is declaring 2013 as the year of MiniMax24 to mark the unusually minor maximum of solar cycle 24, following a remarkably long solar minimum. SCOSTEP is launching a campaign to focus on the current peculiar state of the sun and will conduct year-long scientific and outreach activities to understand and explain the current behaviour of the sun and its potential impact on human society and the Earth’s space environment.

Most recent observations have shown that the weaker polar field strength observed during the solar cycle 23-24 minimum has resulted in a weaker solar cycle 24. “The current solar cycle is a topic of active research, as it does not appear to be producing sunspots in the manner which would be expected” said Olckers.

Sunspots did not begin to appear immediately after the last minimum (in 2008) and although they started to reappear in late 2009, they are at a significantly lower level than anticipated. The International Space Environment Service predicts the cycle to peak at 90 sunspots in May 2013, compared to the 120 observed at the peak of the solar cycle 23 (May 1996  Dec 2008). Olckers highlighted “Sunspot maximum is not necessarily solar activity maximum. The unusual behaviour of the sun may be an indicator that it is progressing towards a grand solar minimum, which may have serious consequences in solar-terrestrial space”.

Olckers educated the audience on various aspects relating to space physics and provided further insight into how space weather impacts our daily lives. We are all interested to see what the sun does next!